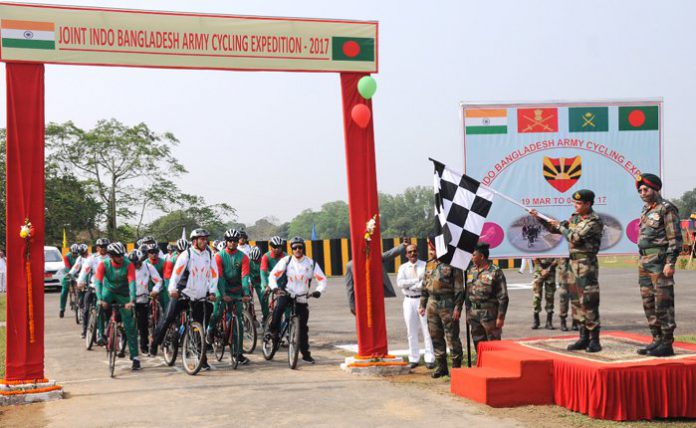 The Indian and Bangladeshi armies began their joint cycling expedition on Wednesday as scheduled, after Gajraj Corps GOC Lt Gen AS Bedi waved the starting flag.

The Bangladesh army team arrived in Tripura on March 19 and received a rousing welcome, with the red carpet rolled out for them at Akhaura check post.

The expedition teams, comprising 15 soldiers each, will cover 500 km in 12 days as they traverse through major Bangladeshi cities Comilla, Dhaka, Faridpur and Jessore before ending at Kolkata on April 4.

The cycle expedition has gained added significance in the light of Prime Minister Sheikh Hasina’s upcoming visit to India from April 7-10.

“This cycling expedition will further cement the bonhomie between India and Bangladesh. It will also help to introduce the armies of both countries to the other’s culture,” said Lt. Gen Bedi in his inauguration speech.