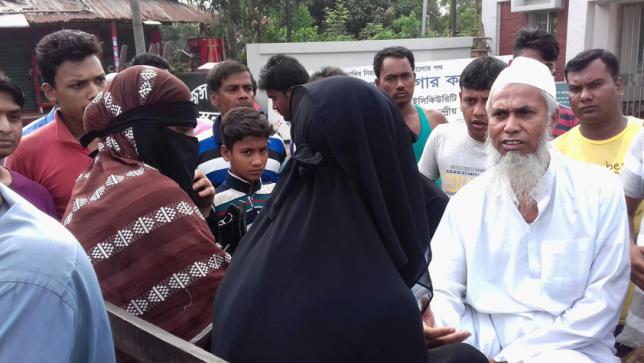 Jail authorities have taken all preparations for the execution of condemned Harkatul Jihad al Islami (Huji) chief Mufti Abdul Hannan and his two associates for the grenade attack on the then UK envoy Anwar Choudhury in 2004.

“We are ready for the execution of the death sentence,” Mizanur Rahman, senior jail super of Kashimpur Central Jail in Gazipur, told our Gazipur correspondent.

However, the authorities this evening beefed up security in and around the Kashimpur jail, where condemned Huji militant Sharif Shahedul Alam Bipul was kept with Hannan. Nearby roads are made off-limit for commoners and business establishments within 500 yards of the prison were kept shutter down.

Two ambulances were seen entering the prison around 6:30 pm, reports our correspondent from the spot.

Earlier in the morning, family members of Hannan met him at Kashimpur Central prison. Hannan’s wife, two daughters and elder brother met him in the jail around 7:45 am.

The prison authority asked the family members of Hannan and another militant, to meet them at the jail yesterday.

As per the prison code, the prison authorities can execute death sentences between 21st and 28th day from the date of issuance of death warrants.

The Sylhet Divisional Speedy Trial Tribunal issued death warrants for the militants on March 22 and so today is the 22nd day.

Earlier in December last year, the Supreme Court upheld the death penalties for the Huji militants, including Mufti Hannan, for carrying out the grenade attack on the then UK High Commissioner Anwar Choudhury in Sylhet in 2004.

Three people were killed and some 70 others, including Anwar Choudhury, injured in the May 21, 2004, grenade attack at Shahjalal Shrine in Sylhet after the Juma prayers.
The Bangladesh-born British diplomat suffered minor leg injuries barely 18 days into his new assignment.