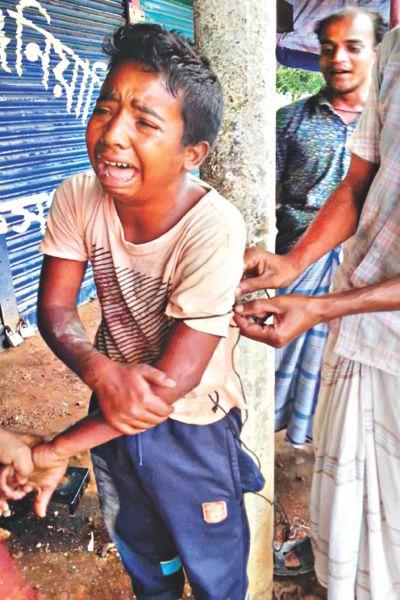 Rajon had been refused water during the torture

The perpetrators had turned into a group of animal characters devoid of humanity when they tortured Sheikh Md Samiul Alam Rajon to death in Sylhet in 2015, said the High Court yesterday as it upheld death penalty of four for having been directly involved in the killing.

Rajon had been refused water during the torture, the court said, and that demonstrated the “cruel”, “inhuman” and “heinous” nature of the crime.

The bench of Justice Jahangir Hossain Selim and Justice Md Jahangir Hossain, however, commuted the life sentence of Noor Ahmed alias Noor Mia, who had filmed the brutal incident, to six months’ jail.

Rajon’s father Sheikh Azizur Rahman Alam, who was present in the courtroom during the delivery of the judgment, said he got justice.

“I thank the government and judges for ensuring justice. I hope sentences of the convicts will be executed soon.”

The video footage captured by Noor and confessional statements of two convicts proved the accusations brought in the murder case, Atiqul Haque told the press.

The HC upheld a lower court’s verdict sentencing five convicts to different terms on the grounds that they had tried to hide the body of Rajon, he added.

SM Abul Hossain, a defence lawyer for Quamrul and Muhit, said his clients would appeal to the Appellate Division of the Supreme Court, challenging the HC verdict, after receiving the full text of the verdict.

On July 8, 2015, Rajon was beaten to death by a group of brutes in Kumargaon Bus Stand area of Sylhet sadar, allegedly for trying to steal a rickshaw van.

Noor Ahmed filmed the horrendous incident and shared it on Facebook.

The 28-minute video footage went viral on the social networking site, which shows prime accused Quamrul Islam hitting the boy with a stick on his feet, joints of legs, shoulders and head.

A Sylhet court in November 2015 sentenced the four accused, including Quamrul, to death.
HC OBSERVATIONS

The High Court observed that if anybody is apprehended by public other than police or legal force over an allegation of committing crimes, he must immediately be sent to the nearest police station or police must be informed so that they arrest him and bring him to book.

“Taking a sudden decision on a mere idea can never bring appropriate result. In this case, it is claimed by the defence against victim Rajon that he tried to steal a van and for that some angry people killed him by beating him but that has not been proved by the evidence of either party.

“When an unusual incident takes place beyond expectation, then it is difficult to retain the situation under control. We must control the environment of our society having awareness and applying basic law, since otherwise society will get a negative message and mass people will take the law into their own hands ignoring the appropriate legal process. In such a situation, innocent people may be victimised even after having no fault of any crime. People should acknowledge from the present case that for such crime committed by perpetrators they are going to meet the gallows and other punishments.”

“All of us including the state must be alert to keep the society safe from any kind of untoward incidents like Rajon’s one,” Justice Jahangir Hossain Selim said.

The judge said, “Most of the people of the country do not have the knowledge of the basic law due to lack of education. To bring the people under awareness of law and how to apply it, state owned media, electronic and print media organisations including journalists, all religious leaders and teachers should come forward to play a significant role”.

“Social movement is also a very important factor in this regard and this awareness of law should be incorporated in the primary education,” the court observed.