Daily Mail 24
29.2 C
Dhaka
Saturday, May 28, 2022
Home International Why America 1st Policy requires US to push back against Russia? 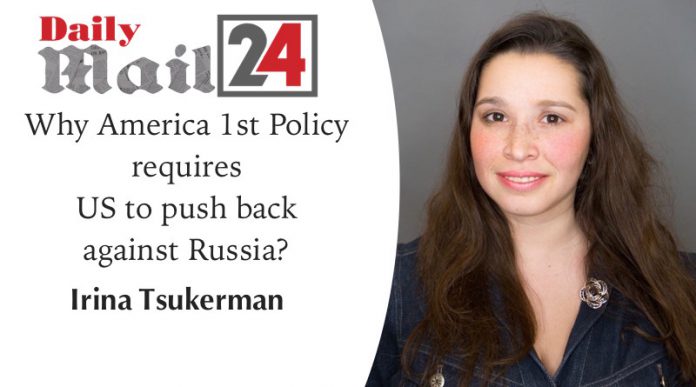 Why America 1st Policy requires US to push back against Russia?

The US may very well be perfectly fine with living and letting live. It may very well be entirely happy to let someone take play world policeman for a change and focus on providing for its own citizens and protecting its borders. It might be for the best if other countries sorted out their issues among themselves. But it’s all a pipe dream.

Russia is not going to let the United States to live and let live. It’s not about Putin’s stay in power or pursuit of dominance in the Middle East, or the restoration of the Russian Empire. It’s about the simple fact that we are under our attack within our own borders, and Russia will not stop until it brings the US to ruin.

How would that scenario look? Alarmingly, the picture emerging is not too far from where we are now: a nation, lost in confusion, unable to tell propaganda and fake news from reality, its political leadership torn apart by endless scandals and investigations, with its citizens trusting foreign leaders more than they trust their own.

Russia has proven to be a danger, playing both parties against each other, sowing chaos, confusion, and aggressively attacking US interests internally and externally. Its Kaspersky software has been used as an espionage tool across various government agencies, endangering our information. Hacking into voting machines and attacks on various political entities was a crude attempt to compromise the integrity of our democratic election problems, and to cause months of finger-pointing and social divisioins.

Over the years preceding this election, Russia continued aggressive active measures, which ranged from bribery of nuclear trucking companies, to espionage through highly placed officials in an attempt to get to the Secretary of State Hillary Clinton, to aggressive hacking and propaganda measures which intensified through election. Under the Obama administration, Russia sent its “diplomats” on fishing expeditions around our sensitive infrastructure, even in such unusual vacation destinations as Kansas.

Additionally, Russia has presented a direct threat to our interests and security abroad. Russian intelligence aggressively targeted US diplomats in Moscow and Eastern Europe, which included such unprofessional and belligerent actions, as physical attacks, including one that left a diplomat badly beaten outside the Embassy, and having to be evacuated, poisonings, severe destruction of property, and harassment that went far beyond the expected annoyances from the old Soviet KGB playbook expected in that part of the world.

Strategically, Russia continues to present a threat wherever it goes, directly interfering with US interests in the Middle East, Afghanistan, and elsewhere. In Syria, Russia constructed a base, while supporting Iranian militias, adversarial to US interests, attacking US-backed groups, and presenting a threat to the Straight of Hormuz, a strategically important trade rout for US and her allies. At numerous points throughout its presence in Syria, US and Russia neared a point of direct conflict, while Russia continued provocative actions, involving airplanes and submarines. In Afghanistan, Russia supplies Taliban with fuel and even weapons, despite the fact that NATO, including the US, is actively fighting against Taliban. Thanks to Russia’s assistance, the Taliban has made significant territorial gains, even as the US surged its own forces inside the country.

Additionally, Russia continues to supply Iran with weapons, now also selling S-400s to Turkey, a country that also presents a significant challenge to US interests in Syria. And Russian government oil company is moving in on the oil fields taken over by the Iraqi forces, IRGC, and Iran-backed militias from the Kurds in Kirkuk, which endangers vested US business interests. Russia’s attacks on Ukraine, including cybersecurity attacks, are widely viewed as potential dry runs for similar attacks on US infrastructure, including the electric grid.

And that’s not including the aggressive lobbying against the Magnitsky Act, the cruel adoption ban that forbids dangerously ill Russian children from being taken in by American families, the non-stop brainwashing of the Russian citizenry against Americans, the troll farms, which makes old school Soviet propaganda seem like child’s play, and the authoritarian actions against foreign NGOs, as well as government-linked hostile takeovers of US hedge funds and other financial institutions in Russia, well documented by Bill Browder and others.

All of that paints a rather dreary picture of the US-Russia relationship, with only one side systematically pursuing hostility and instilling hatred against not only the government of the other, but against all of it institutions, the fabric of society, and way of life. Russia is not acting like a potential partner, even on a strictly limited and professional level. It’s looking to undermine every goal and pursuit of the United States, and to cause an internal collapse. The appeal of hardcore Communism is no longer quite as potent, though to be sure, the Soviet Union’s fellow travelers took strong root in the academia, governments, the media, and think tank world. But non-ideological confusion of values and internal social and political divisions are just as destructive, and have met with a deplorable level of success. Intersectionality, radical movements, and fake pseudoright=wing and pseudo-left wing organized groups and violent events all have the classic Soviety-style footprint on them, and a number of articles have come out to show how Russia had duped unwitting Black Lives Matter activists into organizing events that ended up benefiting Russia.

For that reason, placing America First, and American interests first, requires a strong, unequivocal, coordinated, and systematic response to Russia by President Trump, who should utilize the corruption report to scrutinize and if necessary, list, all members of Russia’s upper echelons for corruption, members of both parties in Congress, who need to put aside political differences and focus on the common goal of defending US national security and political integrity, our media, who needs to focus on exposing Russian connections wherever they are, and not just to the benefit of one party over another, our institutions, including think tanks, who need to be more alert to the foreign money, lobbyists, and other pro-Russia influences, and finally, US citizens, who need to start learning to spot propaganda that benefits the foreign state, and stop giving in to the divisiveness being sown by bots, trolls, and Russian agents of influence at every opportunity.

We need to keep America great, not make Russia great again. The author is a Russian-speaking human rights and national security attorney based in New York.