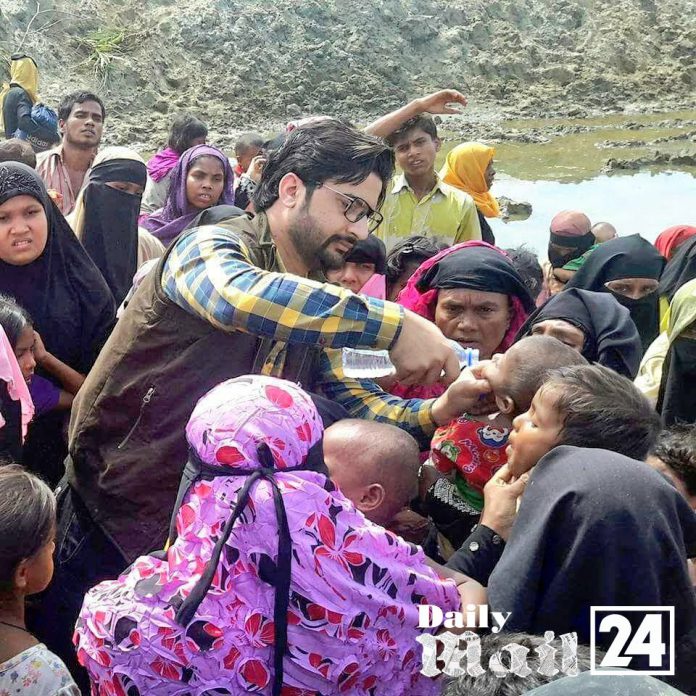 Nizami said many (Refugees) are living without water, food, clothes and shelter. They are sitting wherever they can find a corner, they do not have anywhere to go. They are in an extremely bad state as of now. Speaking to media, Nizami praised the actions of Bangladesh’s prime minister, Sheikh Hasina, in welcoming the refugees, calling it an example of the motherliness of humanity. Bangladesh govt has not only opened the borders but also opened the hearts with love & compassion to the children, women, old, the sick, the wounded and even the thousands who are unborn.

Nizami also said, the Myanmar govt has been carrying out genocide against Rohingyas which is tantamount to declaring a war.” Mentioning the worldwide criticism against Myanmar govt, Nizami said: “A vested quarter especially Hindutva brigade is hatching conspiracy capitalizing on the Rohingya problem for political benefit in India & spreading fake news that Rohingya Muslims killed hindus & Bangladeshi Muslims are forcing Hindu refugees to convert into Islam.” Nizami said “I met the Hindu refugees in Cox’s bazar & they totally denied these allegations.

The hindu refugees blammed Myanmar army for the genocide & also thanked Bangladeshi govt for providing assistance and shelter to them. Nizami urged people to remain alert against such “conspiracy” and to come forward and help the Rohingya Refugees. Nizami said “Our team will visit each Rohingya camps & distribute food, medicines and essentials among the refugees and will ensure their safety on humanitarian grounds.”