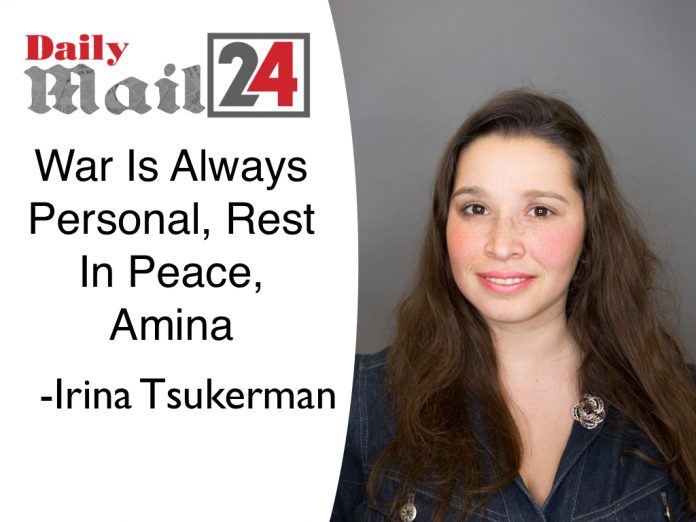 The last thing one would expect as one winds down for the night after a long day, which included a terrorist attack in one’s own city, is the news that a real life acquaintance, however brief the nature of that interaction, has been assassinated.

But today it happened, and it got personal in a way that I could not imagine. When I learned about the assassination attempt against Amina Okuyeva and Adam Osmayev, which killed Amina and wounded her husband, I was in shock. These were not just some abstract political figures I hear about on TV. I have met both of them just a year ago, while in Ukraine.

I don’t have words to express the sense of anger, sorrow, defeat, and utter horror at this deliberate, vindictive, and atrocious murder. But I will try to put into words why this death should matter to anyone outside the scope of this conflict.

In September of 2016, I returned to Ukraine, the country of my birth, for the first time in 21 years.  I was there as a delegate of ACCESS NY, the young professionals chapter of the American Jewish Committee, at a conference commemorating the 75th anniversary of the Babyn Yar massacre, or what is known in the West, as “Holocaust by bullets”. I had never been in Kiev in my life, and against advice of my concerned family members, who, along with me, had left the country as refugees, I’d be spending my 21st anniversary at a commemorative ceremony featuring President Poroshenko, after being out of that country and having nightmares about returning to it, for all this time.

I had no idea what to expect, and was both apprehensive and curious. I wanted to see how I would perceive the country I actually fled, as an adult. Did anything change? Would I be fearful? Angry?

I can spend many pages writing about my experience, which was emotionally intense, and physically grueling, as I threw myself into both the conference, and the experience of the country to the extent I could with full abandon. I was staying in a big hotel, famous as an epicenter of intelligence surveillance of foreigners since the Soviet days, by myself in a room. At the same time, I was coming to terms with a rather contentious political situation back home.

Ukraine turned out to be both familiar and distant. And the conference brought both stark contrasts in perspectives, experiences, and ideas. We had originally left because of anti-Semitism. There is no doubt that much of this sentiment is still there within certain segments of population, who sought to minimize the Jewish experience in the Holocaust, to promote the nationalists also known for their anti-Semitism, or who blamed the economic problems in Ukraine on the corrupt Jews in the government. There is also no question, that there was, for the first time, a genuine attempt at an open dialogue, exchange of ideas, and an honest attempt to confront these perspectives. We were introduced to a surprising diversity of subjects, viewpoints, and speakers of all imaginable backgrounds. One of the panels dealt with the diversity within the Ukrainian volunteer forces fighting against the Russian invaders, and Russian intelligence-backed factions in Luhansk and Donetsk.

There were Jews, Chechens, Ukrainians, and others represented. They each had a unique voice and reason to join in an multiethnic coalition against these forces, poorly armed, yet courageous and dedicated. Whatever the political situation in the cities, whatever the sentiment among the people away from the front lines, the overwhelming sentiment I got from the group of presenters, was one of unity and brotherhood in the truest sense. They weren’t just fighting against armed thugs and for the preservation of Ukraine’s territorial integrity, but rather, standing up for truth, against bombastic obfuscation, and for something greater than themselves.  Whatever the issues inside Ukrainian government with cynical corruption and unwillingness to fully put to rest old tropes, bad habits, and a culture of passivity and defeatism, people like Amina and Adam stood for exactly the opposite.

Amina and Adam came from Chechnya and were vocal critics of both Putin and Ramzan Kadyrov, who heads Chechnya, and is widely thought to be basically on Putin’s payroll.  Now, the history of Chechnya is a complex topic, which is best addressed elsewhere. However, it was clear to me, that in the instant case, this courageous couple believed one basic fact that I could not ignore: that evil should not prevail. And Putin’s aggression in Ukraine is nothing short of evil, because he not only infringed on another nation’s sovereignty under the flimsiest of fabricated excuses, but lied to his own nation, turned a bloody sacrifice of many young men into a way to boost his own failing prestige, and used Ukraine as yet another corrupt scheme, which bankrupted both countries, but gave him an excuse to distract from internal shortcomings, scandals, and assassinations of critics. And Kadyrov was his loyal ally in suppression of dissent. In fact, it is Kadyrov that is widely believed to have facilitated or at the very least covered for Boris Nemtsov, a leading opposition member who was shot dead in the most public way imagined.

Amina and Adam took a bold stand against the regime by thuggery, and met the same fate as Nemtsov and many others. Adam, fortunately, survived, but was wounded. Amina did not make it after the second assassination attempt proved successful. I met them both after their speech and was inspired. These were two ordinary people who chose to do extraordinary things, take extraordinarily courageous and principled stands, instead of hiding, and leading a tranquil problem-free life. They were ready to sacrifice themselves, so that the regime committed to evil, to destruction, and to sowing chaos wherever possible would not triumph. This is something we can all learn from, no matter the extent of the ethical battles we are faced on the daily basis. And they did not stop what they were doing out of fear after their first assassination attempt in June.

For me, it’s personal. It’s personal, because Amina is not just a nameless, faceless member of untold numbers of people who have died as a result of this preposterous inexcusable invasion by Putin, the man who claims to speak for an entire country, and who values no life except his own. She was a young woman, just like me, who chose to leave her comfort zone, and to become an individual among the faceless masses of those who were willing to go along to get along, to be brainwashed by propaganda, to ignore what went on around them, so far as it did not affect them personally. The people who choose to fight for something like that are never just obscure masses. They are the individuals who rise above the masses. They are the stories of courage, of principle, of critical thinking, of conscience.

When you think of this ongoing war in Ukraine, and of an effort to bring justice, freedom, and truth from the forces of entropy, don’t think of statistics, of cemeteries with unmarked graves, of butchered bodies, of tormented souls, and of basements where the abducted volunteers are brutally tortured.

Think of Amina and how she was full of life and energy, and had traveled to a different country to stand up to two powerful, obscenely wealthy dictators – and though, they had destroyed her body, ultimately she won, in helping to expose who they are. Corrupt, cowardly, soulless sniveling creatures, who have to send anonymous assassins to shut down personally, the fighters who have lousy weapons against their armies and tanks.  Putin and Kadyrov may have won the battles, but it’s people like Amina who will, sooner or later, win the war. The war, that is deeply personal, the war, that is fought by souls and individuals with courage, and convictions, not by gray mediocrities hiding in their palaces and behind the young people whose lives their sacrifice just to keep control of their coffers.

The author is a human rights and national security attorney in New York.