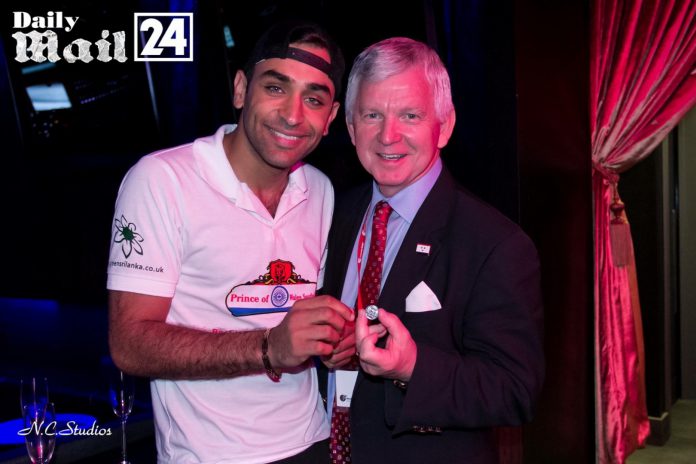 Kiran Rai hosted the World corporate games and met the president of super model and the Lord Mayor of Liverpool and was reigned head of media for the games and got the inside scoop for the daily mail 24.THE WORLD’S BEST TEAM BUILDING EVENTS FOR BUSINESSES AND ORGANISATIONS OF ALL TYPES AND SIZE. Founded in 1988 the Corporate Games are the world’s largest multisport festivals for businesses with great sports and fabulous celebrations for everyone to enjoy regardless of their age, ability or level of fitness. The Corporate Cups are fantastic single sport events designed to deliver unrivalled experiences for everyone involved. Great leaders like Nelson Mandela, Princess Anne, Francois Mitterrand and many more have been Patrons. At Toronto Canada late in 1985 Dr Maureen Johnston (O’Bryan) the Founder of the World Master Games conceived the idea of the World Corporate Games.

Dr. Johnston saw that there was a need for a project that offered everyone of every age and ability the chance to play sport on a worldwide basis, represent a team, wear its colours and be proud to be part of a multisport festival for businesses, organisations, institutions and societies of every size and kind. The Games were to have no barriers to participation and would be the first open equally in every respect to women and men. They would also be the first to integrate participants with disabilities.

Dr. Johnston founded Sport For Life, a company dedicated to bringing global sport competition within the reach of everyone.

The first requirement was to find a great city to stage the Inaugural Games. Many cities were visited and considered. Dr. Johnston’s choice fell upon San Francisco whose vibrant Mayor, Diane Feinstein, now a Senior US Senator, backed the concept from the beginning.

San Francisco is the business centre of California, close to Silicon Valley and a great destination city for global visitors. The 1st World Corporate Games was staged in 1988 and was an instant success.

Concord, a nearby city in California requested the rights to Host the Games in 1989 and all events were successfully completed. In promoting and publicising the new Games an American athlete ran, swam, roller-skated and kayaked his way across the country from Concord Mass to Concord California visiting 27 other Concords en route. Hawaii followed and became the 3rd World Corporate Games , attracting many thousands of participants from all around the world to the Islands for a very special Games with medal presentations on the beaches and under the palm trees of Oahu.

In keeping with the worldwide nature of the Games the 4th was held in 1991 in Lille France under the Patronage of President Mitterrand and presented a truly spectacular Opening Celebration in the Stadium du Nord.

In 1991 the 1st Winter World Corporate Games  was held in the USA at Steamboat Colorado. Winter Games followed in Austria at Seefeld and Gastein.

The first license to stage Games outside the world events was granted in 1991 and the 1st Australian Corporate Games began in Sydney in 1993. Thredbo hosted the Austalian Winter Corporate Gamesbeginning in 1994. There were soon Corporate Games  held annually in Australia’s major cities of Sydney, Brisbane and Melbourne which have successfully continued for 25 years.

Nelson Mandela was Patron of the first multiracial worldwide sports event held in South Africa in the post-apartheid era – the 1994 World Corporate Games Johannesburg. 10,676 athletes participated in a truly wonderful and inspiring Games.

One after another the great cities of the world followed including Geneva, Stuttgart, Zagreb, Budapest, Seville, Bilbao and The Hague.

Very successful UK Corporate Games  have been held every year in a range of powerful UK Cities.

For several years wonderful Games have been held in Athens and the Istanbul Corporate Gameshas been staged for more than 20 years..

The growth of Sport For Life and the Corporate Games  has been further increased with the development of the World Corporate Cups  and Regional Corporate Cups  which are single sport events of all different kinds.

The World Corporate Cup of Soccer has been held annually for several years. The first was staged with Manchester United in 2008, the second at Manchester City in 2009, and continued for the next 5 years in the UK at Liverpool FC in Anfield, followed by West Ham United and Everton’s Goodison Park respectively

Europe Corporate Cups of Dragonboat, Netball and Soccer have also been successfully staged in Stoke-on-Trent in the UK and in other great destinations including Bucharest, Romania.

Licenses have been granted to organisations in Mexico, Romania, France, Bermuda, South Africa, New Zealand, India, Japan, Canada, Ecuador, Peru the USA and many other interesting places throughout the world from Okinawa to Pakistan. This has led Dr. Johnston to form the Worldwide Corporate Sport Community  in which all hosts of the Games and Cups become Members.

In 2017 more than 20 major annual events are well-established on the sporting and business calendars of the world, in addition to the World Corporate Games in Houston, Texas, USA.

These are the world’s best team building events for business, organisations and institutions of all types and kind- the Ultimate Mix of Sport, Business and Tourism.

More and more competitors, companies and organisations are enjoying the vast array of benefits delivered by the Worldwide Corporate Sport Community .

From conception to their most recent development, the Corporate Games and Cups as part of the Worldwide Corporate Sport Communityare a truly global movement of “Weekend Sports Warriors” – those everyday athletes who get fit for business and for life through participation in sport, achieving benefits that can last a lifetime.