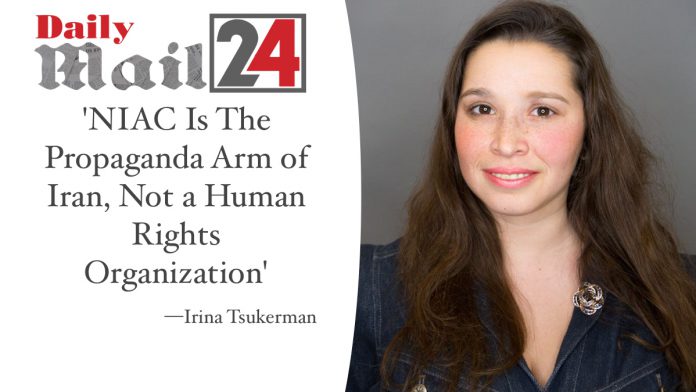 ‘NIAC Is The Propaganda Arm of Iran, Not a Human Rights Organization’

They wine and dine members of Congress at monthly dinners. Their members serve on the boards of successful, well-respected organizations run by Iranian-Americans. They claim to be the voice of moderation and friendship.

In reality, NIAC is the propaganda arm of Iran, strengthening its position inside the United States through outreach, propaganda, disinformation articles, character assassination attacks against critics, and intimidation of dissenters through lawsuits.

The Department of Justice should investigation this lobby group for its failure to register under Foreign Agents Registration Act (FARA), expose their frauds and destructive role in the US, and inform Congress and the administration about their destructive roles as agents of influence for Iran’s intelligence.

NIAC claims to be dedicated to strengthening the voice of the Iranian Americans and promoting greater understanding between Americans and Iranian people. In fact, NIAC has been acting as a de facto lobbyist for the Islamic Republic of Iran, in violation of the Foreign Agents Registration Act ((22 U.S.C. § 611 et seq.)  This law requires agents representing interests of foreign powers in a political or semi-political capacity to disclose their relationship with the foreign government, as well as related activities and finances. NIAC, led by the Swedish-born activist Trita Parsi, is likely in violation of the relevant provision. As a key and overtly pro-Iranian voice advising the Obama administration on the nuclear deal  with the Islamic Republic, NIAC consistently voiced the interests and point of view of the “Reformist” faction of the regime, represented, in part, by the current president Hassan Rouhani.

While in Lausanne during the JCPOA negotiations, Trita Parsi put himself forward as a member of the Iranian negotiating team, and repeatedly boasts of his access to Iranian regime leaders. He has dined with Iran’s former hardliner president Mahmoud Ahmadinejad, met with the brother of the current president Hassan Rouhani, corresponded and maintained close ties with  Foreign Minister Zarif, dating from Zarif’s previous position as Iran’s Permanent Representative to the United States in New York. That level of access suggests trust on the part of the normally suspicious regime. Furthermore, a shady family that had financed NIAC,  started by Parsi in 2002, stood to gain financially from the sanctions relief, as they openly backed the deal.  The Namazis, who peddled influence between the White House and Teheran, ultimately overstepped the boundaries and have been arrested by the regime.  Parsi continued pro-regime fabrications through the years since NIAC’s inception.  Most recently, Trita Parsi fabricated (in allegation) that green card holders from the seven countries designated by the most recent immigration suspension were being asked about their views on President Trump upon entering the airport.  He then doubled down on this mendacious claim.

Contrary to the popular view, the Reformists are no more moderate than the hard-liners such as the previous president Mahmoud Ahmadinejad, and are yet another group of people played by the ayatollah-led regime. NIAC was consistently deceptive in advocating the potential consequences of the nuclear deal, and attacked critics of the deal, such as the well-known dissident and journalist Ahmad Batebi, for their public concern. NIAC-affiliated public figures, such as Muhammad Sahimi, had attacked critics of the deal as right-wing pawns and pillars of the Israel lobby in the U.S., an argument that directly reflected the rhetoric of the regime itself and furthered its interests through a character assassination campaign. Trita Parsi himself had visited President Obama at least 33 times, and remained his leading adviser.

There is evidence to believe than rather than being an organization and an individual sympathetic to the Regime, NIAC and Parsi actively aided Iranian intelligence. For instance, a report from Iranian American Forum, based in London, claims that a secret message delivered by Trita Parsi to their office in September 2011 was identical to a secret message delivered to Washington in 2007 by the regime’s envoy Salman Savafi. Both messages warned against designating the IRGC (The Iranian Revolutionary Guards) as a terrorist organization because it would wreak havoc in Iraq, and also jeopardize the possibility of improving relations with Iran.  Separately, an unclassified Pentagon report described NIAC’s collaboration with two Iranian intelligence agents, who were invited to give a Congressional briefing (links to report included). Meanwhile, most recently, a number of senior defense and intelligence officials have come forward  against designating IRGC as a terrorist organization, in a language similar to the two messages cited above, particularly warning that such designation could endanger US troops in Iraq and endanger the fight against ISIS. Given the close connection between NIAC and the previous administration, one can easily surmise NIAC’s role in making that impression and continuing to play the role of the regime’s lobbyist in preventing unfavorable policies.

Above-mentioned Trita Parsi unsuccessfully sued a noted Iranian American journalist Hassan Daioleslam for defamation, where Mr. Daioleslam argued in his articles that NIAC is an unregistered lobby group. A treasure trove of documents on Mr. Daioleslam’s website unveil the intricate web of deeply rooted and personal relationships between NIAC members and regime families. More recently, they demonstrate how NIAC is deceitfully trying to divorce the West’s view of Iran from its obvious connections with North Korea.  Furthermore, NIAC appears to be the only widely known group representing interests of Iranian-Americans, and has gained renowned in the US educational and cultural institutions. For that reason, perhaps, only Reformists in Iranian prisons are promoted in the NIAC-sponsored English language press, and for the same reason the voices of the NIAC-sponsored “dissidents” drown out and shut down the voices of legitimate anti-regime critics throughout the United States.

Prior to the lawsuit, NIAC was registered as a (501) ( c) (3). Despite the fact that NIAC spent only about 5% of their activity on human rights advocacy and the remainder on lobbying activities in violation of their status, the State Department did not require them to register as foreign agency and did not refer them to the Department of Justice.  In court, NIAC and Trita Parsi were both sanctioned for systematic abuse of discovery process and repeated false and misleading declarations to court. Interestingly, this abuse of process included the altering of 1400 emails referencing the word “lobby”.  In fact, Parsi himself used the word “lobby” to describe NIAC in documents obtained by Eli Lake. Additionally, NIAC and Parsi withheld vital documents on numerous occasions and made false comments before the court.

The sanctions were upheld on appeal. Many Iranian Americans, as well as the governmental press in Iran, consider NIAC to be the”Iran lobby”.  This organization, and its director Trita Parsi, pretend to be the leading voice of the Iranian Americans in the United States, in reality representing the interests of a state that promotes terrorism, ignores sanctions, engages in systematic and widespread human rights abuses, and has utilized the money released by the Obama administration towards developing its illegal ballistic missile program.  NIAC-affiliated entities have engaged in a pattern of shutting down the dissent by Iranian dissidents and other critics who have come out against the regime and who have criticized the Reformists.  NIAC and its individual members release deceptive missives, which paint a distorted portrait of the Islamic Republic’s regime and excuse away its anti-Western, anti-Israel rhetoric.

NIAC, rather than representing the interests of Iranian Americans, promotes the interests of an openly adversarial and threatening regime, all tax-free. Its duplicity and intentions should be unmasked and exposed.

In fact, after the oral argument in the above-cited case,  Judge Wilkins states:

“I got to tell you that your client is lucky that I was not the District Judge, because you will be here appealing much more severe and higher sanctions, because I think he (the District Court judge) had extreme patience in dealing with lots of misleading and false representations and countless times when your client was trying to slice the baloney very thin, as far as trying to parse what their obligations were.”

Given the strong signal from the judiciary, the Department of Justice and Congress should launch an investigation into NIAC’s and Trita Parsi’s deceptive and insidious activities in violation of the United States law, and contrary to U.S. interests.  A hearing examining its pattern of duplicity, character assassination attacks on critics, and self-serving agendas that in no way help the interests of the Iranian American community will bring to light its many instances of violations, and likely, tax evasion. It may reveal the illicit funding of its pro-Iran agendas by figures within the regime itself. Finally, it may give grounds for a recommendation that the State Department should require NIAC be designated as a foreign agent, and that the Department of Justice should investigate NIAC, Trita Parsi, and other relevant subsidiary groups and individuals for fraudulent activities, tax evasion, and other violations.

The Department of Justice should investigate NIAC’s and Tria Parsi’s failure to register under FARA and require them to do so immediately, while strictly enforcing the periodic reporting requirement in the interests of national security. Likewise both NIAC and Trita Parsi should be charged with perjury and obstruction of justice and investigated for their lies under oath and tempering with evidence during the course of the trial.

The Islamic Republic’s aggression against the Western, and particularly U.S. interests, takes many forms, but not the least of them is “lawfare” against critics, information warfare, the shutdown of popular dissent at home and abroad, institutionalized espionage, and high-positioned agents of influence. Not-for-profit cultural organizations purporting to represent intercultural understanding and the interests of particular communities are an excellent vehicle to promote these active measures of swaying public opinion, influencing decisionmakers, and dictating pro-Iran policy to the U.S. government and institutions. Exposing these instruments of the Islamic Republic for what they are will shred their credibility, and give opportunity to pro-freedom, pro-Western institutions to arise among Iranian-Americans, and will give voice to the Iranians that are looking to defend the interests of the United States, rather than its adversary.