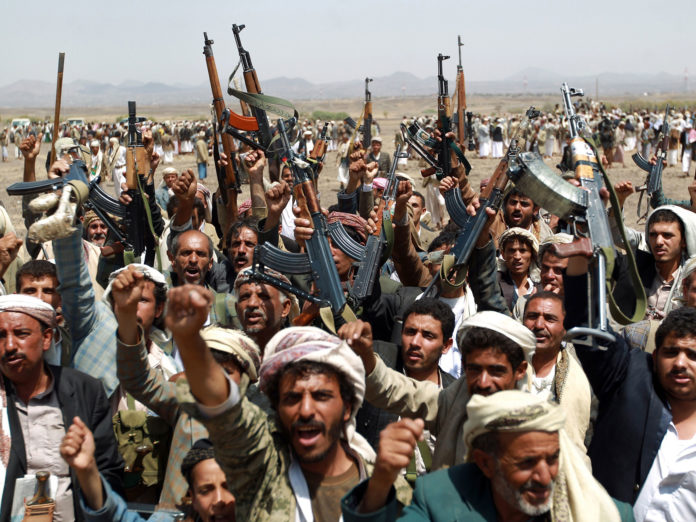 Disrupting Iran’s Game In Yemen: It will take more than playing with debris

We now have official evidence that the missiles fired in the direction of Gulf States originated in Iran. The Houthi rebels in Yemen are not just opponents of the Saudi-backed government. They are armed by Iran, which is proliferating illicit arms used not only to perpetuate the civil war, which has killed over 5000 civilians, but to threaten other countries, and potentially be used to prevent Saudi and Western vessels from safe passage through the strategically important Strait of Hormuz.

Recently declassified pieces of missiles, evidently produced in Iran, or by Iranians, was present to the UN by US Ambassador Nikki Haley, who accused Iran of setting the Middle East on fire. There are three possible ways the Houthis could have gotten these advanced weapons.

First, as we know, Iran has been smuggling weapons to Yemen directly, through Somalia, or possibly even via Kuwait waters. Second possibility, harder to explore, is that Iran has helped the Houthis build missile factories in Yemen, which produce the missiles, such as the one recovered, and which are based off Iranian prototypes and thus identical. Third possibility is that some Iranians are actually on the ground in Yemen, and they were the source of this, and other missiles, whereas the Houthis are engaged in low-level ground fighting.  If further investigation shows that Iranians are either building factories in Yemen or are themselves involved in firing missiles, this proxy war (which is no longer proxy given the direct Saudi aerial bombardment), ups the ante on the level of hostilities between Iran and Saudi Arabia, potentially bringing them for the first time into direct conflict. Whether either possibility bears out, remains to be seen.

What we also don’t know is how many missiles are in Houthi possession at the moment, when and where they are planning to fire next, and how long before their strikes become more accurate and actually hit a Gulf vessel or to reach land. We don’t know what else they may possess. And frankly, we don’t know much about that side of the conflict at all, because most of our efforts has focused on ISIS and Al Qaeda, and whatever we may know about the level of Houthi preparation for further conflict and Iranian involvement beyond the declassified debris is hidden from public view and not being acted upon.  The US, clearly, was aware of this information for some time, and was holding it back for a dramatic unveiling in front of the international community.

Nevertheless, Ambassador Haley’s speech received limited coverage in the US media. This may be a for reasons, including American media being focused more on domestic scandals than on national security ramifications, and the international community preferring to ignore the inconvenient facts. But it may also be due to the high likelihood that the origin of the missile is the world’s worst kept secret. In the short term calculus, releasing this information without also raising questions about the long-term ramifications and engaging in public inquiry may not lead to any noticeable changes in international policy concerning Iran. It certainly did not deter China from deepening its military relationship with the Islamic Republic.

So what’s to be done? The first step is to develop a joint plan with the Gulf States and our African allies to secure all known smuggling routes, which may mean employing, at least temporarily, a significant joint naval presence around the relevant areas. All suspicious or unidentifiable vessels should be stopped for inspection and sunk at first sign of hostility.  Second, there likely is already an aggressive intelligence gathering effort ongoing with respect to Houthis. I suspect we know a lot more than we let on. At some point, we are going to have to make a choice whether it’s best to take quiet action in identifying and eliminating threats or publicizing our findings and making it that much harder for other countries to come up with excuses about not taking further action.

Yet another issue to keep in mind after the US has asked the Saudis to lift the humanitarian aid blockade, is that as brutal as Saudi aerial campaign appears to be, Houthis have been known to use human shields. Just like Hamas, they embed themselves among civilians making it impossible to minimize civilian casualties. Still, the US and Saudis should at this point clarify the aims of the operation. Do they want to restore some semblance of Saudi-backed government? Bring the Houthis to negotiation table? Create a unity government? Whatever the case may be, so long as they receive weapons and backing from the Iranian regime, they will have motivation to fight. Tactical response alone here is not going to cut it. To the extent possible, identifying any local production of missiles or missile parts should be top priority, as well as ascertaining whether any Iranians are in Yemen. Taking them into custody (alive to the extent possible), is the obvious next step.

But the root of the problem lies with the Iranian strategy. To prevent it from unraveling if not by one means than by another, Iran should be made to bear such heavy costs that it should be an easy decision for it to roll back and stop a particular operation. If the fighting in Yemen costs Iranian lives or results in repercussions that bankrupt the country, or if the Islamic Republic is pressured financially elsewhere such that Yemen becomes a lost cause and a hopeless misadventure, they will no longer be able to afford to spread their influence with such enthusiasm. Creating numerous and severe problems for Iran on several fronts simultaneously would be the best way to go. That potentially means underhanded subversion wherever possible, because the element of surprise creates paranoia, and paranoia leads to weakness and bad judgment. These attacks should be periodic, synchronized, unpredictable, and preferably, untraceable to any local sources.

Physical exhaustion should be combined with a consistent campaign of moral demoralization. Simply put, Houthis must find it too costly for themselves to ally with Iranians, and perhaps even find a benefit in getting rid of them and finding for other solutions to their grievances. At the same time, demoralizing Iranian fighters remains the ultimate goal since they are the sources of backing for the Houthis. Clever, insiduous disinformation campaigns from within would work much better than spending time on twitter wars, letters to the commanders that will get thrown out, proclamations in public fora, or risible threats. Turning various groups against each other through various mishaps and mass confusion is just the beginning. Creating imaginary traitors both among the Houthis and the rank and file will make even the most organized forces howl with frustration sooner or later. There is no shortage of possibilities for those with imagination and resources. What is lacking is political will to do more than pay lip service and provide colorful demonstrations for countries that are more interested in making a quick buck than in saving the world from destabilization and conquest by a rogue regime on the loose.  Notice that at the end of Nikki Haley’s presentation, she has invited the international community to examine the evidence and to acknowledge the connection between the regime, and its unique fingerprints and the events in Yemen. Over the next few days, a coalition of the willing will indeed do just that. There will be more discussions, some suppressed outrage (after all, the question of Jerusalem is still ripe!), and perhaps even a strong-worded resolution or two. There is, however, no specific call for action, not even for support for the United States in whatever plan of action it has.  We can surmise that this may be the case for one of two reasons:

The United States has not yet formulated a specific plan of action and is waiting for others to get on board with at least the idea of the extent of Iranian evil, and then to take some time together building support for some sort of concerted international action. The US does not actually want anyone to take any affirmative actions, merely to support the US at the UN and not interfere with future plans, whenever those develop. Either way, there are few reasons for optimism. Despite the initial early success of decertification, any measurable action in Congress has been derailed, stalled, and is on the way to oblivion.

Given that even the action that should be relatively easy to implement and that was directly ordered by the President is nowhere near the point of agreement, waiting for international consensus on a tough military position (which is the only position there is to take vis-a-vis Yemen) is likely an exercise in futility. Likewise, despite a new National Security Strategy that is meant to roll back Iran’s aggression (perhaps through deliberate cyberwarfare, perhaps through tougher action against Iranian militias in Syria), there has not yet been a visible pivot towards actually doing anything that would send Iran reeling back. And whatever action has been taken clandestinely, has not yet been effective.

A timeline for taking action, even an internal one, would be most useful at this point, because, with nearly a year into the new administration, we are still pretty much in the same place with regards to Iran, and time is on the Islamic Republic’s side. Each day of Western inaction means more victims of the regime, more weapons accumulation, more opportunity for territorial gain and terror, more surety in its own success. The longer we wait, the harder the fight.