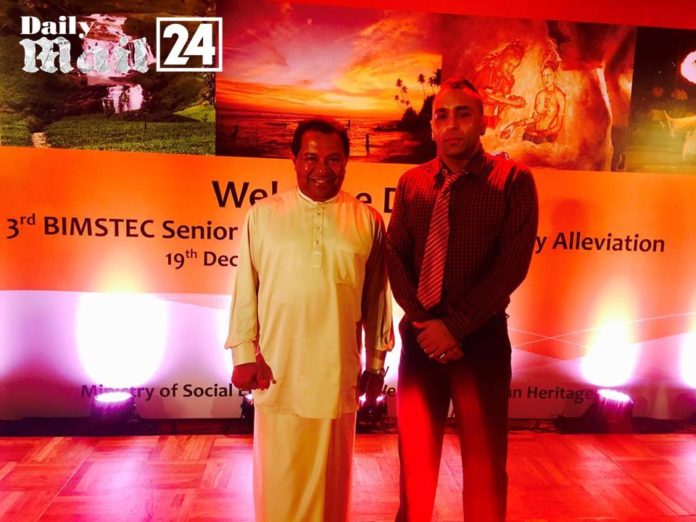 Grand opening of the ‘BIMSTEC’ at the Cinnamon grand

London Artist Kiran Rai who recently came to Sri Lanka a few days ago met S B Dissanayake at the grand opening of the Bimstec at the Cinnamon grand which was held last night. The Bay of Bengal Initiative for Multi-Sectoral Technical and Economic Cooperation (BIMSTEC) is a regional organisation comprising seven Member States lying in the littoral and adjacent areas of the Bay of Bengal constituting a contiguous regional unity.

This sub-regional organisation came into being on 6 June 1997 through the Bangkok Declaration. It constitutes seven Member States: five deriving from South Asia, including Bangladesh, Bhutan, India, Nepal, Sri Lanka, and two from Southeast Asia, including Myanmar and Thailand. Initially, the economic bloc was formed with four Member States with the acronym ‘BIST-EC’ (Bangladesh, India, Sri Lanka and Thailand Economic Cooperation). Following the inclusion of Myanmar on 22 December 1997 during a special Ministerial Meeting in Bangkok, the Group was renamed ‘BIMSTEC’ (Bangladesh, India, Myanmar, Sri Lanka and Thailand Economic Cooperation).

With the admission of Nepal and Bhutan at the 6th Ministerial Meeting (February 2004, Thailand), the name of the grouping was changed to ‘Bay of Bengal Initiative for Multi-Sectoral Technical and Economic Cooperation’ (BIMSTEC).

As stated in the Declaration of BIMSTEC, its objectives are:

To create an enabling environment for rapid economic development through identification and implementation of specific cooperation projects in the sectors of trade, investment and industry, technology, human recourse development, tourism, agriculture, energy, and infrastructure and transportation.

To accelerate the economic growth and social progress in the sub-region through joint endeavours in a spirit of equality and partnership. To promote active collaboration and mutual assistance on matters of common interest in the economic, social, technical and scientific fields. To provide assistance to each other in the form of training and research facilities in the educational, professional and technical spheres. To cooperate more effectively in joint efforts that are supportive of and complementary to national development plans of Member States which result in tangible benefits to the people in raising their living standards, including generating employment and improving transportation and communication infrastructure. To maintain close and beneficial cooperation with existing international and regional organisations with similar aims and purposes. To cooperate in projects that can be dealt with most productively on a sub-regional basis and make best use of available synergies among BIMSTEC member countries.

He objective of building such an alliance was to harness shared and accelerated growth through mutual cooperation in different areas of common interests by mitigating the onslaught of globalisation and by utilising regional resources and geographical advantages. Unlike many other regional groupings, BIMSTEC is a sector-driven cooperative organisation. Starting with six sectors—including trade, technology, energy, transport, tourism and fisheries—for sectoral cooperation in the late 1997, it expanded to embrace nine more sectors—including agriculture, public health, poverty alleviation, counter-terrorism, environment, culture, people to people contact and climate change—in 2008.