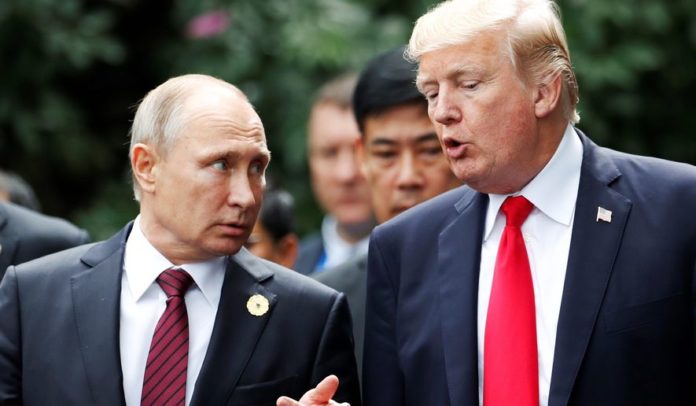 Putin, not a particular threat to US democratic processes

Two of the faulty arguments about Putin, made primarily be Republicans or self-identified conservatives (to avoid a squabble over the meaning of the term) is that:

1. He has not been a particular threat to US democratic processes, and to the extent, he has been a problem, it has been due to lack of oversight over these processes and his increasing aggression under the Obama administration.

2. Even if the worst about Putin is true, and he is not quite the Russian patriot his own successful propaganda makes him out to be, he can be well considered at least a short-term ally for the US against various terrorist entities, including ISIS, and is part of the Western civilizations bulwark against Islamism. (That argument is made by Erik Prince, as well as a number of conservative activists, donors, and strategists).

To address the first, briefly, US flawed policy on Russia started with George W. Bush, who wisened up to Putin’s agenda by the end of his tenure, but has not taken any aggressive measures to push back at him, and certainly did not do much at first signs of Russia’s aggression in Georgia. On Congressional sides, there were scandals and corrupt arms deals going back to the Clinton administration. Obama indeed significantly contributed to the problem, and his undermining of cybersecurity and counterpropaganda efforts inside his own agencies should be investigated, exposed, and fixed. None of that, however, absolves the Trump administration from the responsibility of ensuring that Putin’s propaganda holds as little sway as possible and that Putin’s policies, inimical to US interests, are countered and his aggression against our allies is not only noted and discouraged, but affirmatively fought and reversed. Kicking the can down the road to the next president will only strengthen Putin’s positions in the Middle East, and elsewhere he can do damage to our alliances, without, in any way, empowering us or creating smoother paths to resolving problems.

The second issue is the illusion that the United States and Putin-led Russia are currently fighting on the common front against assorted Islamist threats. In reality, Putin has been the central part of the problem, and the primary apologist and enabler of the worst of Islamist, as it suited his personal interests, for many years, and has in fact, significantly contributed to the problems we are facing today. To be sure, the ex-KGB lieutenant colonel is not a leftist apologist for the worst of Islamist practices. Indeed, as Bill Browder’s testimony this summer showed, Putin’s main concern is less Russia’s welfare or national interests, even as he defines them than his own political survival and self-enrichment.

However, for that reason, Putin’s pragmatical considerations have aligned him with some of the worst Islamist regimes, while having caused impediments to US fight against ISIS during the course of their supposed alliance. Putin’s regime has a close military and defense alliance with Iran and has sold S-300s to the regime, among other weapons, while also providing extensive military training to Iran’s initially sub-par army. Putin is now growing closer to the unabashed Islamist Erdogan, recently selling Turkey S-400s, in part as a visible snub to Turkey’s NATO allies, which Putin sees as a threat to his own ambitions in the “near abroad” of Europe. Furthermore, as late as the end of September in 2017, Russia, which helped concoct the infamous “red line” deal in Syria with the Obama administration, keeping Assad, Russia’s longtime ally in power in exchange for giving up chemical weapons, knowingly attacked US-backed forces in Syria. And we all know how that deal worked out; Assad got to stay and keep his weapons, too. Russia knew that Assad’s forces were planning a chemical attack on civilians, but failed to prevent it.

At least as troubling as Russia utilizing outright lies to embed itself as a serious actor in Syria, now building naval bases, and threatening the strategic waterways (the Strait of Hormuz), is Russia’s support of the Taliban vis-a-vis ISIS in Afghanistan; Russia’s backing of the Chechen expansion in Syria, which is already starting to get out of hand (Chechens comprised a significant portion of ISIS; Russia’s calculus may be simply to get Chechens to take care of Chechen problem and keep them far away from home), and Russia’s assumption of leadership in Yemen, where it has successfully been playing both sides of the conflict, again, ultimately embedding itself at potential risk to US access to the strategic Bab al-Mandeb strait. Russia is not an opponent of Islamism or any other faction or ideology, no matter how toxic or aggressive. Putin will work and grow close, with whichever government or group, will bring about his three central goals: 1. Legitimizing Russia as a serious player in the Middle East and reclaiming its Soviet-era spheres of influence 2. Off-setting economic and political losses from its violent takeovers of portions of Ukraine, George, incursions into Moldova, cyber attacks on Estonia, aggressive posturing towards Baltic states, interventionism in the Balkans, and election meddling in Europe and the United States and 3. Countering US influence at home and in the Middle East.

That many in conservative circles see Russia as a potential ally on any front, or a solution to the problems it has helped create is a sad commentary on the general state of ignorance and success of Russia’s own disinformation.

The author is a human rights and national security lawyer based in New York. She is a native Russian speaker and has presented about information warfare, and Soviet intelligence influence on Iranian propaganda, among other topics. She has also written for a wide variety of publications, including PJ Media, American Spectator, JPost, and Israel HaYom.