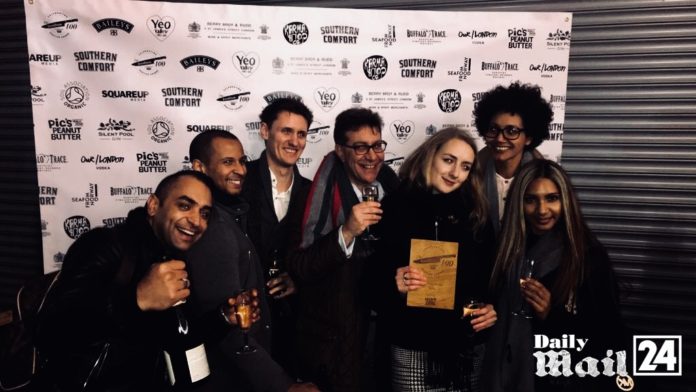 IN CASE YOU haven’t seen, the Foodism 100 list has been announced and our inspiring actor Kiran Rai who has a side career as a journalist covered the event last night that saw 300 people receiving awards across the business .shining a light on the 100 venues and businesses we feel are making the biggest contribution to effecting positive change in London food and drink.

But the goodness doesn’t stop there – far from it. On 25 January, we’ll be celebrating the businesses at a food- and drink-filled event at Borough Market’s Market Hall, where we’ll be announcing ten businesses – one from each category – who we feel are the worthy winners.

Your ticket, priced at £45, will include fantastic food, including fish canapés from Seafood from Norway, pork baps from Roast Hog and vegetarian delights from Ethiopian Flavours. There’ll be pizza from Baz + Fred, seafood paella from Brood, Comptoir Gourmand will have you covered for dessert, and we’ll have a range of cocktails and wine throughout the evening to go alongside the (short) awards ceremony. There’ll also be a photo booth, a jazz band and more.

You’ll also have the chance to mingle with people from the Foodism 100-nominated businesses, as well as other luminaries of the London food scene and, of course, the Foodism team, too.