Mo Farah became the fastest marathon runner in British history as he produced a promising and gutsy performance to finish third in his second London Marathon and he spoke to Kiran Rai at the Finish Line of 2018 London Marathon while Rai interviewed more than 20 athletes including the winners and runners up’s from Mens Line, Woman line and Para Athletic athletes. 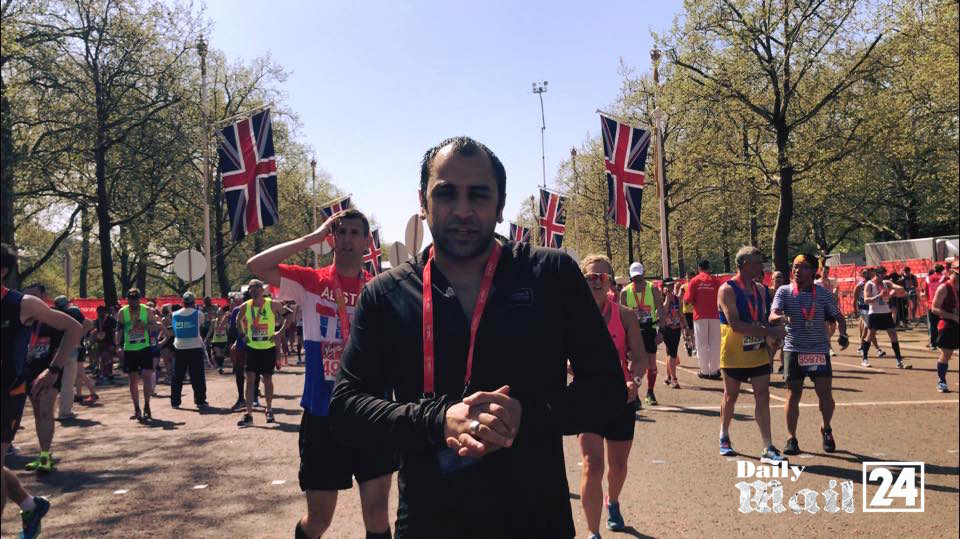 A “knackered” Farah crossed the line in a time of 2:06:21, comfortably clear of Steve Jones’ 33-year-old British record of 2:07:13, despite two mix-ups with water bottles in which he said marathon staff were taking pictures rather than helping him find his drink.

The race was won by Eliud Kipchoge, the Olympic champion and the man considered by many to be the greatest marathon runner ever, in a time of 2:04:17.

After a stunning start, it had appeared for a while that Kipchoge may be in contention to break the marathon world record, but he was unable to maintain his speed over the final few miles in scorching conditions.

Farah, who finished in a disappointing 8th place on his London Marathon debut in 2014, delivered a much-improved performance on his return to the capital’s tarmac after three months of intensive training in Ethiopia.

I was saying to the people on motorbikes to tell the staff to be a bit helpful instead of taking pictures. I wasn’t wasting energy, I just needed a drink. I had to get it right.”

Paula Radcliffe, the wife of Farah’s new coach Gary Lough, said she had “never seen Farah look this tired before” as he crossed the finish line with a grimace on his face, before collapsing to the ground a few metres later.

Farah was pipped to second place by Tola Shura Kitata, who produced a personal best of 2:05:00, but the British racer will be enthused by a run in which he finished well clear of Kenenisa Bekele, the legendary Ethiopian who crossed the line in sixth.

Mary Keitany failed to challenge Paula Radcliffe’s 15-year-old world record as she faded out of contention before finishing in a disappointing fifth in the women’s race.

Radcliffe had said before the race that she believed her 2003 time of 2hr 15min 25secs was under real threat from the Kenyan, who had won the 2017 marathon in the second-fastest time in history.

And Keitany, 36, looked set to produce a genuine challenge after blitzing clear in a remarkably quick start to the race.

But she was caught by the eventual winner, fellow Kenyan Vivian Cheruiyot, after dramatically losing her rhythm with around 10 miles remaining.

Cheruiyot, 34, crossed the line in 2:18:31 after producing an astute performance a year after finishing fourth in her first London Marathon.

The 38-year-old pipped Switzerland’s Marcel Hug into second place, with Daniel Romanchuk of the USA third.

The leaders were well inside the course record time of one hour 28 minutes and 57 seconds during the first half of the race, in what were fine conditions for wheelchair racing.

But as the race wore on it became a tactical affair as the top three braced themselves for a late burst.

And just like last year, six-time Paralympic gold medalist Weir edged out two-time winner Hug to claim victory in a time of 1:31.15.