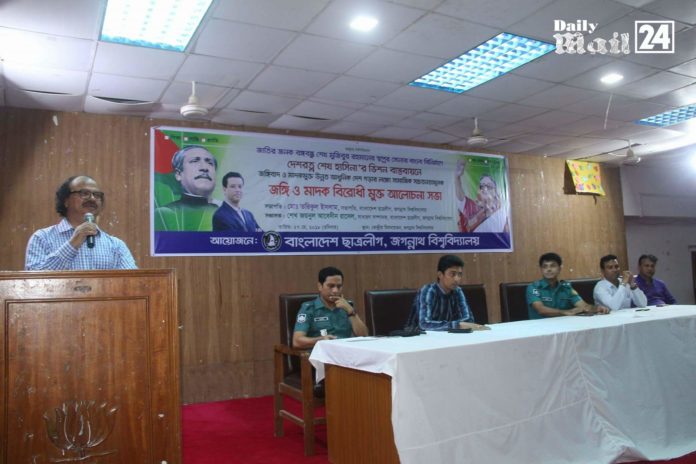 Jagannath University branch of BSL has organized a free awareness meeting of anti-militancy and anti-narcotics awareness campaign to create an advanced modern country with militancy and drug-free, the slogan of the program ‘Say no to drug, build a drug-free country.’ The discussion held on Sunday at the university’s auditorium.

Vice Chancellor of Jagannath University Prof. Dr. Mizanur Rahman spoke in the program. BSL General Secretary Sheikh Zainul Abedin Rasel in the chair and President of JnU BSL Tarikul Islam presented the program. The Vice-Chancellor said that it is possible to cover the bad effect of the drug for a while by the government currently being anti-drug campaign, but elimination is not possible. To eradicate the drug, only a few days of operations will not be conducted, the lasting social movement will be conducted. Social awareness will be increased by organizing anti-narcotics meeting seminar with the people of all levels of the society.

He said drug is an addiction. Those who do not have any work, they take drugs. To eradicate the drug, it will have to create huge employment. Instead of drug addiction, books, sports addiction should create.