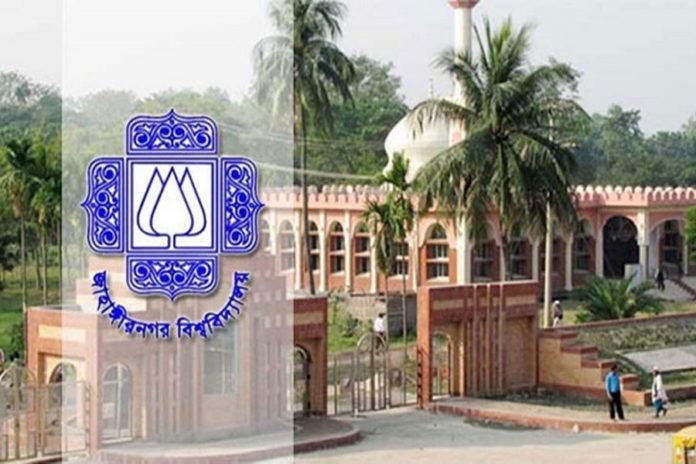 A faction of pro-AL teachers of Jahangirnagar University (JU) today besieged the administration office on four-point demand including dean appointment of law faculty.

At 8.30 am Pro AL teachers of ‘Bangabandhur Adarsha O Muktijuddher Chetonay Bishwasi Progatishil Shikkhak Samaj’ took a position in front of both the new and old administration office and kept block till 3 pm.

During their blockade, these teachers protested different irregularities of JU Vice-Chancellor Professor Farzana Islam alleging that she has violated the university acts, statutes and syndicate conducting rules at different times. They also demanded the VC panel and JUCSU election.

Spokesman of the anti-VC teachers’ group Tareq Reza of Bangla department said, ‘JU VC Dr Farzana Islam is violating the rules for dean appointment. Though an associate professor has in law faculty, she appointed a teacher as the dean of law faculty who is the teacher of another faculty. Which completely goes against the dean appointment rules’.

He also denounced JU VC alleging that she violated university acts, statutes and syndicate conducting rules and threatened for continuing their protest program till their demands met.

Meanwhile, JU authority expressed distresses for the anti-VC group’s protest program through a press release around 4.30 pm. In the press release, without any prior notice, the anti-VC group besieged the administration offices and they forcibly elicited the registrar and the other officials of the university.

The university authority denounced them and alleged that their frequent protest programs badly hamper the normal activities of the university.

Mentionable, the anti-VC teachers’ group is conducting their protest program since April last for different issues on the campus.