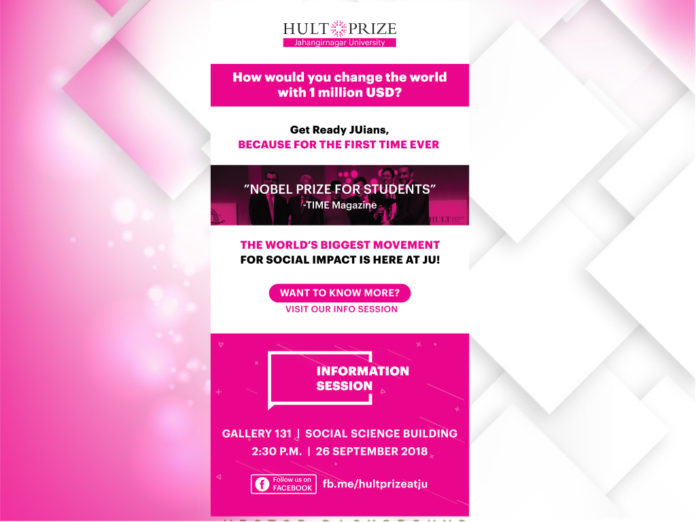 ‘Hult Prize’, the largest student competition of the world is going to be held at Jahangirnagar University (JU) campus very soon.

To organize a massive students’ competition, an information session was held today (Wednesday) at the seminar room of JU Social Science faculty in the afternoon.

Presided over by JU Director of Hult Prize Direcor Minhazul Abedin, Assistant Proctor of the University Moudud Ahmed addressed the function as the chief guest.

Over 400 students from different department and institutes took part at the session.

The organizers of the competition said, online round of Hult Prize at JU will begin from next October 10. Three students from any department or any batch can make a team to participate in this competition.

Director Minhazul Abedin said, ‘for the first time we are going to organize such innovative events on the university. The participators will able to take part in the competition without any registration fees.

The detailed information about the competition are available at the official facebook page www.facebook/Hult Prize Jahangirnagar University and for any query anyone can contact through 01745029999.

Mentionable, every year Hult Prize competition takes place in thousands of university campus of all over the world to find out a sustainable solution to a social challenge patronized by Mr. Bil Clinton, Ex US president.

This year the students of JU are getting the chance to compete in this prestigious international competition.

The Champion team from JU will directly qualify to one of the regional finals held in New York, London, Dubai, Singapore or any other big cities of the world according to their choice.

The Global Final will take place at the headquarter of United Nations in New York and the Global Champion will be awarded with 1 million US dollar.