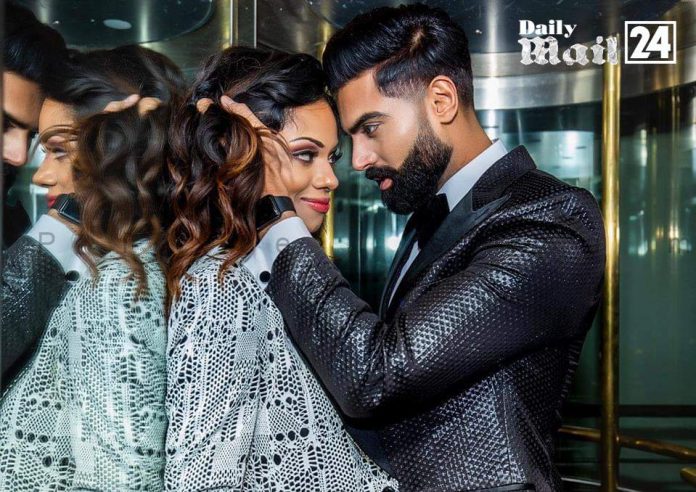 We are in conversation with two renowned international models from the Hague the Netherlands,  who created a niche for themselves in the world of fashion Tariq Akram and Darshani Khodabaks  about the promotion of their international magazine shoot soon to be launched worldwide in magazines and about their future plans and endeavors.

1. Tell us more about this project.

Darshani and Tariq: This is an international collaboration where we tried to create something special this shoot was different because there was more acting involved and the different emotions and moods the characters go trough during the storyline  about an impossible love story between two characters in these case myself as the female lead model  character and  Tariq’s character as the male model.    it required some what of acting skills and we had to emphatize with the characters. According to the scenes and parts our team created the looks,  different sets,  hair styles and make up for us and was comparable with a movie shooting rather than the usual high fashion shoots because our approach was completely different from the usual one.

2. What parties were involved in terms of designers, hair and make up teams, and models?

Darshani :  We put together a team of the best  designers from the Netherlands and abroad  renowned international designers like: Monique Desar, Kevin Leslie and Esmeralda Dijk. As for the male model we went for Tariq as we felt he suited the male character a lot and has acting skills which as required for this shoot and script. Hair and Make up for both models was done by famous make up artist from the Netherlands Kaur Artistry by Sanjeeta Kaur Singh.

3. What were the challenges you guys faced during this project?

Darshani: Far and foremost to match the schedules of everyone involved, several locations as the script demanded a variety of locations because of different scenes and to put everything together as we worked with a team of busy professionals.

4. So Darshani tell us, what are your next upcoming projects about? We have seen you working a lot back to back travelling the world winning international awards for your work as an international female model what’s still on your bucket list?

Darshani: There is a lot more i want to achieve and put down, i was forced to take a little break from a month due to  health conditions but there is a lot lined up back to back in terms of shows and big commercial projects  in  Dubai, Pakistan, India, London etc. apart from that i will focus a lot on managing, training, directing and putting up projects this year.

5. Tell us more about your new roles?

Darshani:  Well like i mentioned before, i will be focusing on for example training and managing  beauty queens and  professional models in the role as a beauty queen manager and national director trough Imossi model management as i was a former beauty queen myself. In regards to directing and organising shows that too will hopefully happen soon and we have that lined up,  i got approached to do so because i run my own company apart from modeling as well so i guess it seemed like a logical step in my career and a new challenge and we will be doing a lot more with clothingbrands.

6. And ofcourse we have Tariq amongst us as well the lead male  model of this project. Tariq tell us how were you discovered as a model?

Tariq:  It all just accidentally started for me at the age of 16th when i went to pick up a friend who used to model at the time when i was asked to take a couple of shots because the photographer at the time got impressed by my facial features and height i guess.

7. What’s the image and prejudices you had about modeling?

8.  How would you describe your personal style? Where do you pull your inspiration from?

9.  Was modeling something you always pursued?

Tariq: Not really to be very honest with you, modeling kind of happenend for me i got approached for modeling jobs because fashion and show directors were fond of my height and facial feautures at the time i was more inclined towards acting and played the lead as an actor in short films, videoclips from famous artists, and some commercials as well.

Tariq: Imagine a lot of asia and the middle east countries, some shows in the Netherlands lined up as well the exact details will be disclosed soon.

11. Why do you guys work  together during international fashion weeks and fashion shoots around the world?

Tariq: I think because we have a lot in common and get along very well . We have the same ambitions, goals and we find ourselves passionate about the same things in life we spend hours talking about our passion for our profession for example , and ofcourse there is a certain on screen chemistry  we share and on the runway ofcourse and i think most importantly there is a lot of mutual respect and admiration for eachother on a personal and professional level.

Background story  “The Power o(r)f Love” The story behind the story One day I was watching the series “The Queen of the South”. After a few episodes I was so intensely inspired, I had to make a filmscript/story about it. Two Cartel leaders; a Strong, intelligent and beautiful woman called Teresa and a handsome, athletic and gifted man named Guerro. Two Powerful people whom will have to choose between Power or Love.

When I start an editorial, it is always through inspiration, when an idea comes up, I grab my pink notebook and start writing a “filmscript”. For hours and hours, I will write and I get lost in the story for the editorial. After that is finished, I start to rearrange the film scenario into a scenario which is suitable for a story on pictures. Making a filmish like description what happens on every particular set/picture. I discovered that the models can project themselves into the scene, Imagine and feel more intense, what the story of that picture must hold, which makes the pictures so much stronger.

Every picture has to tell a story of their own, but must also fit in the overall storyline. This story is about Teresa and Guerro, who knew each other from early childhood. Back than their parents (also Cartel leaders) got along great and the kids grew up as best friends. When Teresa and Guerro were in their teens and had a crush, a Conflict occurred between the families, witch lead to a lifetime feud.

They never saw each other again, till they both were invited to a conference in the Kurhaus in the Netherlands. The moment they saw each other they knew the love was still there… but … They both love their power also… If they choose for love than they have to give up their throne in the Cartel … or… they have to mislead their parent