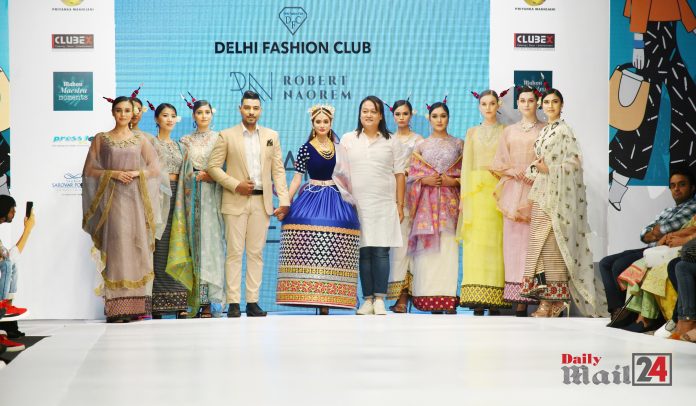 New Delhi : Fashion is something which connects all irrespective of state, country or region, Hence with a theme of Fashion crosses Borders , an International fashion extravaganza “Asian Designer week” was organized at Taj Vivanta Hotel, Dwarka in New Delhi between 27-28 April 2019.

During this Fashion Week, Delhi Fashion club Organized a Unique Fashion Show to promote khadi, Handlooms & North East Textiles from Manipur, This show witnessed Magical designs by Celebrity Designer Robert Naorem, who have been working in industry as Designer & Make-up artist Both for more than 18Yrs, He have been working closely with local weavers of Manipur & create magical designs which promotes & reflects the rich cultural value of north east India specifically Manipur. He has presented his Design collection in cities around the globe which includes fashion cities like Paris, Milan, London & Dubai. He is among the top north east fashion personalities who have worked with many Bollywood celebrities & Super models.

Delhi Fashion Club presented Robert Naorem show on day two of the fashion week which witnessed the richness of Handlooms & textile of North Eastern State Manipur. This collection was made of Silk & used handlooms of Manipur, It includes all woven fabrics converted into modern designs making it wearable. These designs were specially made to make any special occasion more special & also reflect the rich cultural values of Manipur. Accessories for the models includes Naga inspired spears headgear which were beautifully amalgamated with Manipuri sensibilities of designs. This collection is not just about promotion of handlooms but also unity among Naga & Maite two important classes of people in Manipur.The Showstopper for this show was renowned North East Actress from Manipur Ms. Soma Laishram, she wore beautiful blue Manipuri bridal dress & which won the hearts of the audience on its entry, complete hall was full of cheers, claps & whistles. Her beautiful walk & presentation increased the grandeur of the show, everyone was stunned to witness the angelic aura & feel of the complete show. This show was curated & directed by Mr. Harshit Dhingaun & show Choreography was done by Ms. Rachna.

Photography done by Pandiraj, Karan , Prince & Zayed ahmed ,Styling was done by Samananda. Some of the known models who graced the ramp were Ms. Parul Mishra,Miss Asia Pacific 2011 who opened the show in dramatic way, which then followed by other models which includes wijaidin Pamai from Nagaland, Suni & monjir from assam along with 3 international & 4 national models.

On this occasion, Designer Robert Naorem & Actress Soma Both said “We are very happy to be part of this event, we really like the concept & initiative by Delhi Fashion Club to promote handloom & textiles and we also thank Mr. Harshit Dhingaun for the initiative for Khadi, north east Textile & Handlooms promotion in mainland India. It’s great to come at this international platform in Delhi and perform”

Talking about this initiative, Mr. Harshit Dhingaun, chairman , Delhi Fashion Club said “We believe in promotion of Khadi , textiles & specially handlooms from north east India ,We truly believes that North east fashion & fabrics can make India more international and its already bringing big change. Moreover, I am in love with the hospitality , culture & values of people of north east, hence we thought to showcase these values through the rich handloom & textile industry of Manipur here in Delhi, as fashion connects all of us together ”

Delhi Fashion Club (DFC) is a government of India appreciated firm and association. It have been working hard to promote Handlooms, khadi & textiles especially from north eastern states in mainland as per there social initiatives. This initiative have been appreciated by Government of India in past & DFC is keeping the initiative going with this fashion week. DFC also provides fashion management, PR, productions, shoots & Model grooming workshops, which is considered best in the industry. DFC Recently tied up with MIW Foundation to do more social fashion shows, social events & handloom promotion.

During the show, FDCI Designer Rina Dhaka was also present and she appreciated the efforts by Robert Naorem & Delhi fashion club for promotion of handlooms. Later, she did the grand Finale for Asian designer week.