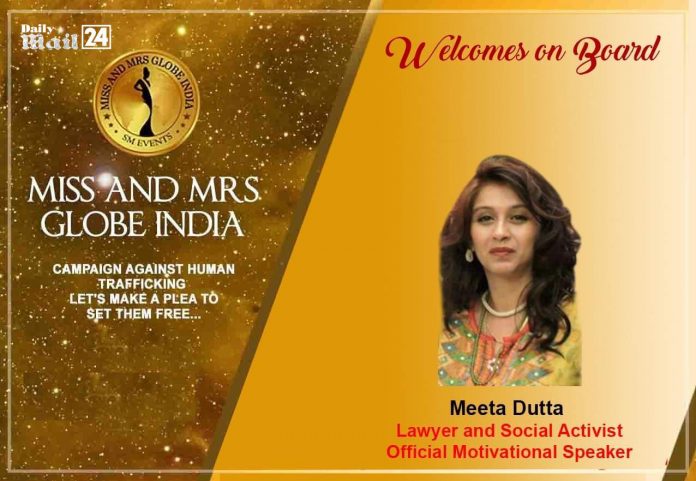 Meeta Choudhury Dutta, a lawyer by profession, a social activist, owner at Styling Divas – a make-up and styling platform, also associated with many NGOs like Feeding India, Shakti Vahini etc and a co-founder at Together for Change – an NGO working in the education and health sector for the welfare of the poor and the needy and is a well known face from the Northeastern part of India.

Also she has done it again to be back in the news for speaking on women’s protection and also enlightening the participants on ways to curb human trafficking at a recently held beauty pageant Mrs & Miss Globe India at ITA, Machkowa, Guwahati, Assam as their Motivational Speaker and Guest of Honour.

She stated that to ensure conviction of the criminals in this heinous crime and to prevent trafficking as responsible citizens :

1. We all should be alert at all entry/exit points of railway stations and bus stops.

2. We should intervene when children and young women are found with suspicious persons.

3. Community vigilance should be strengthened by prompt action.

4. We should immediately act on missing person’s report – they may be subjected to trafficking.

5. A rescue of a victim should never be delayed.

6. Trafficking is an organised crime – the network should be dismantled by taking the help of the media as and when we become suspicious of the happening of such an incident.

In addition to this we should make our home slavery free. To ensure this, we must :-

1. Make sure that our domestic worker is above the age of eighteen years.

2. The monthly wages should be paid through a bank account to ensure that he/she gets the amount of money that the government should prescribe.

3. A police verification must be done and we must also check his/her valid documents issued by the government.

4. We should pay our domestic workers decently in accordance with the Minimum Wages Act so that they are not lured into anything unscrupulous which leads to their becoming a victim of human trafficking.

She also said, “Human traffiking is an organised crime , we all need to unite to fight against it. One can register a missing child complain by calling on Childline 1098  or in writing through the government website www.khoyapaya.gov.in and also request the police to upload details on another website called www trackmissingchild.gov.in which there is a national tracking system for missing and vulnerable children.

Apart from this she also said that the number of rapes are proliferating and the best way to combat is by practising the motto that prevention is better than cure. So the women should become self-sufficient and not depend upon anyone else to protect themselves by learning taekwondo and other means of self defence. In addition to this, the parents should teach their children about good touch and bad touch, once the child becomes a year old. Simple habits should be inculcated in them, like changing the clothes when alone, and not in front of anyone else, and so on. They should not be allowed to sit on someone’s lap, even if the person is a relative.

And the parents should also try to understand any change in the child’s behaviour. If the child gets irritated or fearful of a particular person; cries after seeing him or her; or starts getting a lot of gifts, the parents should be vigilant and must find out the reasons behind it.

These days it is difficult to place trust on anyone in the society. Maybe somebody is trying to lure the child with some gifts to take sexual advantage. You never know that, but what you do know is that you should be careful.

She further added that we all are equally responsible to make or mar a society. It should start from every home. Both the parents should teach their sons not to tease, pass comments at or be disrespectful towards women, instead of only binding girls within their indoor/outdoor timelines and on the length of their dresses.

She further enlightened them about women’s right to even untimely registration of FIR, right to virtual complaints, right to zero FIR against serious crimes like rape, sexual harrassment etc., right to no arrest even if a woman constable is accompanying the officers at night without written permission from the magistrate explaining why the arrest is necessary during the night, and the right to not being called to the police station so on and so forth.