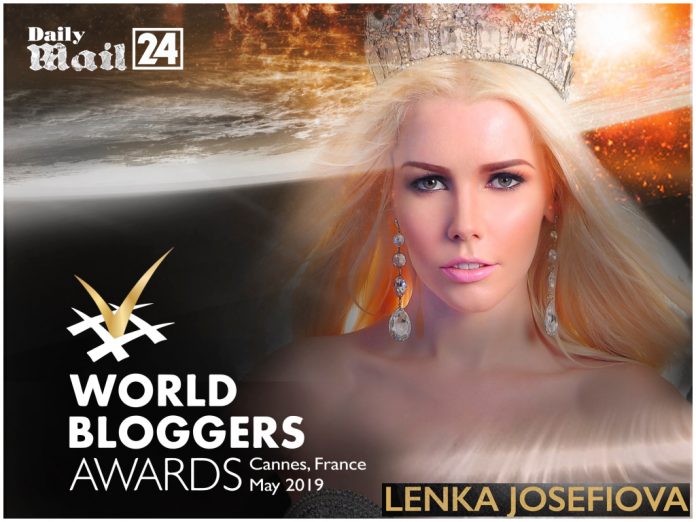 Multi-awarded Beauty Queen & Blogger Lenka Josefiova achieved yet another success this year – she was nominated for one of the biggest bloggers awards in the world – WORLD BLOGGERS AWARDS at the Best Travel blogger category.

Lenka has already won 19 international awards during her successful career, with the last one winning just recently in Dubai during World Fashion Festival Awards 2019. She is Miss European Tourism 2015, Most Influential Tourism Star 2016, World Super Model Most Popular 2017, as well as Best Travel Blogger 2019, naming just few of her achievements.

This Red carpet Gala event & Awards Ceremony will be held during Cannes Film Festival in 24 May 2019 in luxurious Martinez hotel in Cannes – one of the most beautiful historic hotels of French Riviera.. WORLD BLOGGERS AWARDS is the world’s first ever awards for the best bloggers across 22 nominations in different bloggers categories from travel, fashion, lifestyle, fitness, cooking to philanthropy.

This luxury event will be extensively covered by the world’s media & it will witness the contest of the best worldwide social media representatives. One of the media partners of the awards is Film Awards TV. that Lenka is collaborating with since a long time, she was Official Celebrity TV presenter for this channel at the Dubai International Film Festival 2015 & also walking Red Carpet of the Hong Kong International Film Festival 2016.

The main headliner of the event is Gianlucca Vacchi, who is also star nominee.

We wish to Lenka good luck to grab another award & more success to come this year!