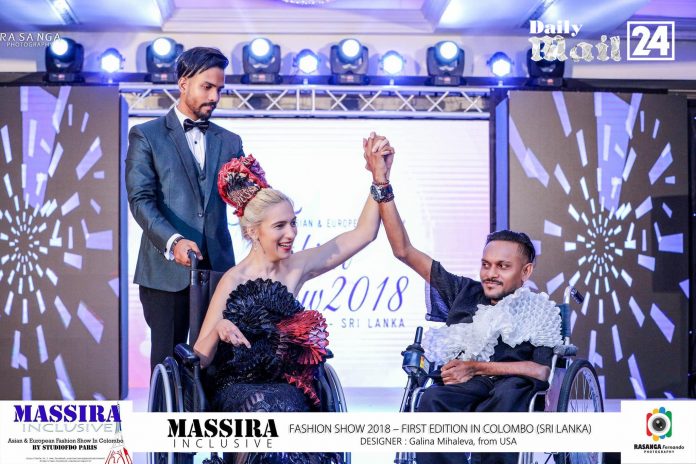 Angelina Wales was born in 1991 in Minsk, the Republic of Belarus. She has an inborn cerebral palsy diagnosis. The model uses a wheelchair in everyday life and at work.

She started her career in modelling in 2010 by cooperating with the Belarusian designer clothes company “O’Jen”. Photos of Angelina wearing clothes of this brand were featured in the Belarusian glossy magazines “La Dolce Vita” and “Pingouin”.

In 2012, the young girl appeared in the episodic role in the series “The Snow is Spinning …” by Russian film producer Vladimir Tumayev.

In 2014, Angelina participated in a special project of the international contest “BezGraniz Couture International Fashion and Accessoires Award” and Mercedes-Benz Fashion Week Russia in Moscow. It was at that event that she first appeared on the runway and was granted a status of a professional model from representatives of fashion industry.

In 2015, a large-scale project “The Art for Inclusion of People with Disabilities” was launched in Minsk with the support of USAID (USA). Within the framework of the project, social advertising videos “Same Dreams, Equal Opportunities”, “TouchDown – Touch as the First Step” were created, where Angelina was also featured. The model’s photos from the videos were plastered on advertising billboards across Minsk and the regional centers of Belarus.

In 2016, Angelina appeared on the runway in the show of Italian designers
“ModaItalia” in Minsk. In the summer of that year, she was featured on the cover of the Belarusian glossy magazine “City of Women”. In the autumn of that year, the young girl signed a contract with the state model agency of the National Beauty School which holds licenses for the participation and organization of international beauty contests “Miss World”, “Miss Europe”,
“Miss International”, “Top Model Of The World”.

In October 2017, Angelina became a finalist of the international beauty contest “Miss Wheelchair World 2017” in Warsaw.

In September 2018, Angelina was a model for Asian-European Fashion Week in