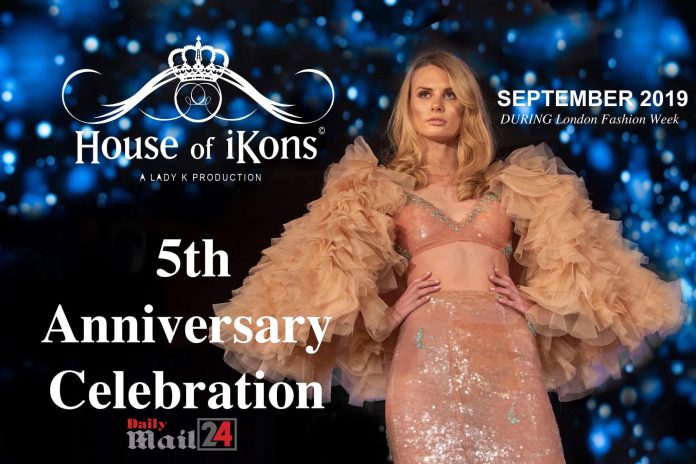 House of iKons is back this season celebrating its 5th Anniversary; the show has successfully drawn in fantastic crowds since its launch in 2014. Now associated with the World Fashion Council, House of iKons is spear heading its designers as the next BIG iKons!

As well supporting new emerging fashion creatives, but also supporting emerging music artists giving them a platform to perform and providing exposure via events here in London and abroad.

Quote from the CEO Savita Kaye; ‘We will continue each season highlighting beauty and creativity not just in design and music but for ALL regardless of ethnicity, size, shape and sexual orientation; as everyone has the right to feel and look good, feel confident about who they are in the HERE & NOW!! Everyone has that right and we will continue to push boundaries and stereotypes… we are still a small drop in this BIG OCEAN… But we will continue to create a storm and bring beauty and creativity to who ever you are, where ever you are, from around the world.

Be prepared to witness first hand these amazing #iKons. Previous year, House of iKons was the FIRST Fashion House to have ROBOTS on the RUNWAY in United Kingdom and platformed one of the youngest designers of 13years of age Designed by JOSH who created bespoke pieces and grabbed the media globally as well as being honoured later this year at the World Fashion Council Awards.

This show was aired and viewed by over 300Million viewers worldwide via BBC World. Always looking to show the best in creativity around the world DURING prestigious London Fashion Week; pushing boundaries to the next level.

This season the most expensive dress in the world retailing at £50millionGBP will be showcased this September 2019 designed by the same youngest designer in the world, JOSH. This rare couture gown will be worn by the beautiful International Model and International Actress herself, Kiera Chaplin.

House of iKons continues to support chidrens fashion from around the world. These iKonic childrens designers have also platformed like our women’s and men’s wear; the little iKonic models have gained global media and press exposure which have led these little iKons from our runwy to projects with TV and Film.

Designed by Josh (Diamonds by Mozafarian)

1. Grand Opening: Be Unique Be You

In Association with World Fashion Council