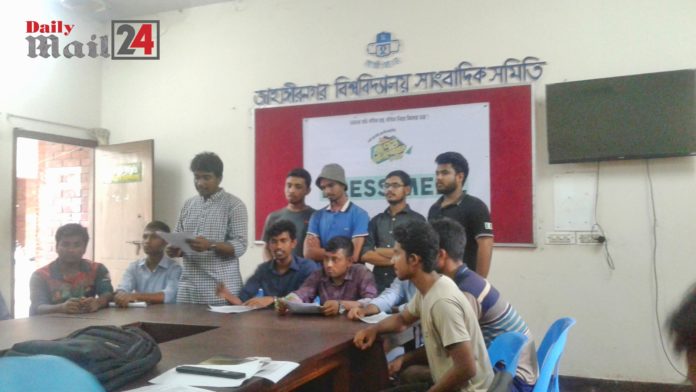 Wednesday (16 October) JUSC announced the event at a press conference at Jahangirnagar University Journalist Association (JUJA) of TSC at 3 pm. Tarek Aziz, convenor of the Olympiad and General Secretary of JUSC read the press release at the conference.

The Olympiad is going to held with the students of class 6-12 from Bangla and English medium. About 5000 students are going to attend the Olympiad. Dr Enamur Rahman, Mnister of sate disaster management and relif Ministry will inaugurate the Olympiad, prof Amir Hossain Pro-Vice Chancellor (administration), Munir Chowdhury Director General of the National Science and Technology Museum will be honoured as special guest on the opening of the olympiad.

The event is arranged for three days. Exam of the participant is being held for the first day, scientific movie show  and space observation on the telescope for the second day and price giving ceremony is being held for the third day. Shahab Uddin, Minister of Enviornment, Forests and Climate Change Ministry will be honoured as chief guest and Dr Enamur Rahman Mnister of sate disaster management and relif Ministry, Eliyas Mridha and Director of Arrangements of Pran RFL company, Pro-VC prof Nurul Alam (Education) and Khabir Uddin main advisor of JUSC will be honoured as special guest in the price giving ceremony on the third and final day (20 October).

Hasan Mahmud Minister of Information Ministry and Maksudul Alam (posthumously) for discovering the genome of jute will be awarded as ‘honour of virtue’ in the program.