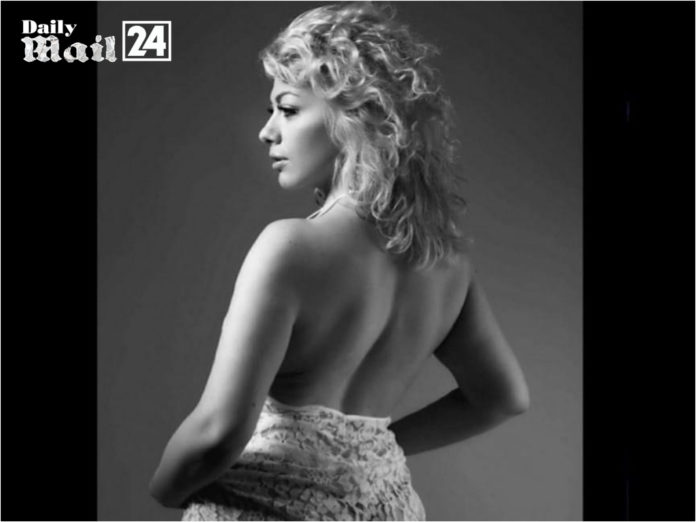 In a very challenging year, when we almost felt like the world stopped in time when seeing each other was perceived as a “mission impossible” due to pandemic restrictions, World Fashion Festival Awards was one of the best online platforms to engage worldwide designers to “think outside the box” and innovate fashion under the current circumstances. 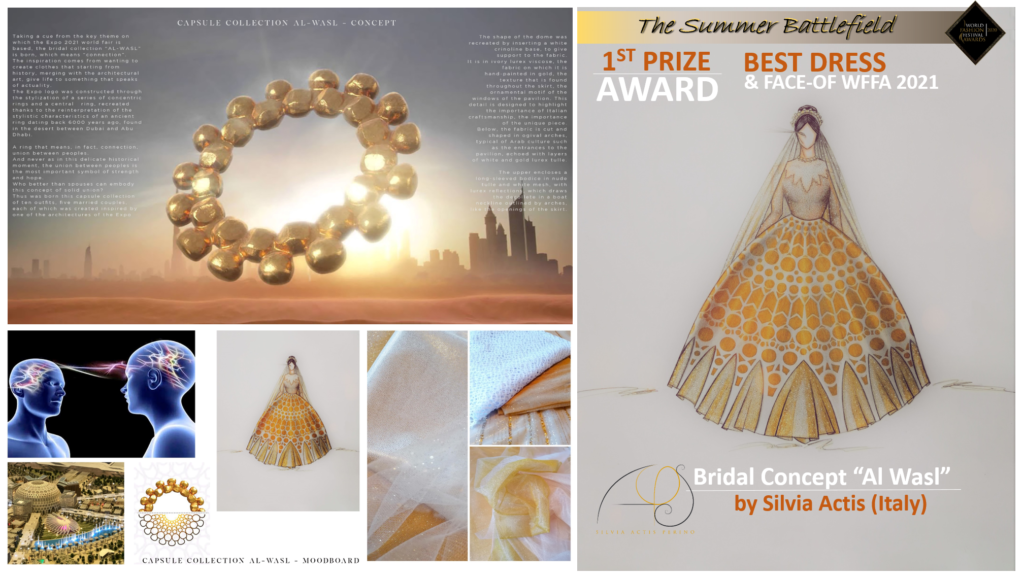 With reflection to WFFA concept of bringing together the ART, CULTURE, BEAUTY and FASHION under one umbrella, “The Summer Battlefield” was the opportunity to compete online for several categories, such as BEST Dress, BEST Collection and BEST Fashion Accessories.

Taking a cue from the key theme on which the “Expo 2020” World Fair was based, the bridal collection “AL-WASL” was created as the “Connection” (nb: the translation of Al-Wasl). 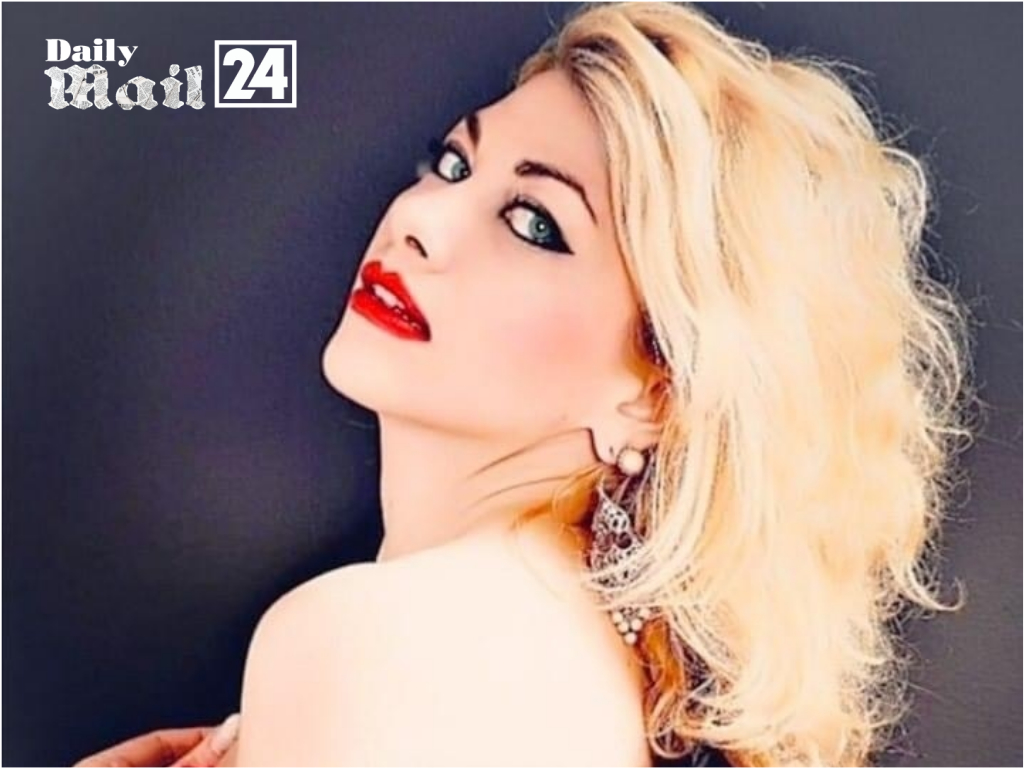 Al-Wasl by Silvia Actis Perino was the winner of the Section: Best Dress of “The Summer Battlefield” which was proudly awarded as the Face-Of the 2021 WFFA Edition 4 because of the unique concept of merging history with the architectural art projected in our current times.

WHO IS SILVIA ACTIS PERINO?

“My name is Silvia Actis Perino, I come from Torino, Italy. I love drawing since I was a child. I remember that on the first day of nursery my mother gave me an apron with buttons in the shape of a pencil, so I thought that this was a sign that the drawing was written in my destiny.

At the end of High School of Art, where I learned to draw portraits, landscapes, the human figure, still life, and much more, I continued my course of study at the Academy of Fine Arts. In June 2014, I took the Master degree in Photography and Fashion Design with full marks distinction, The choice to draw clothes has been a sort of vocation. 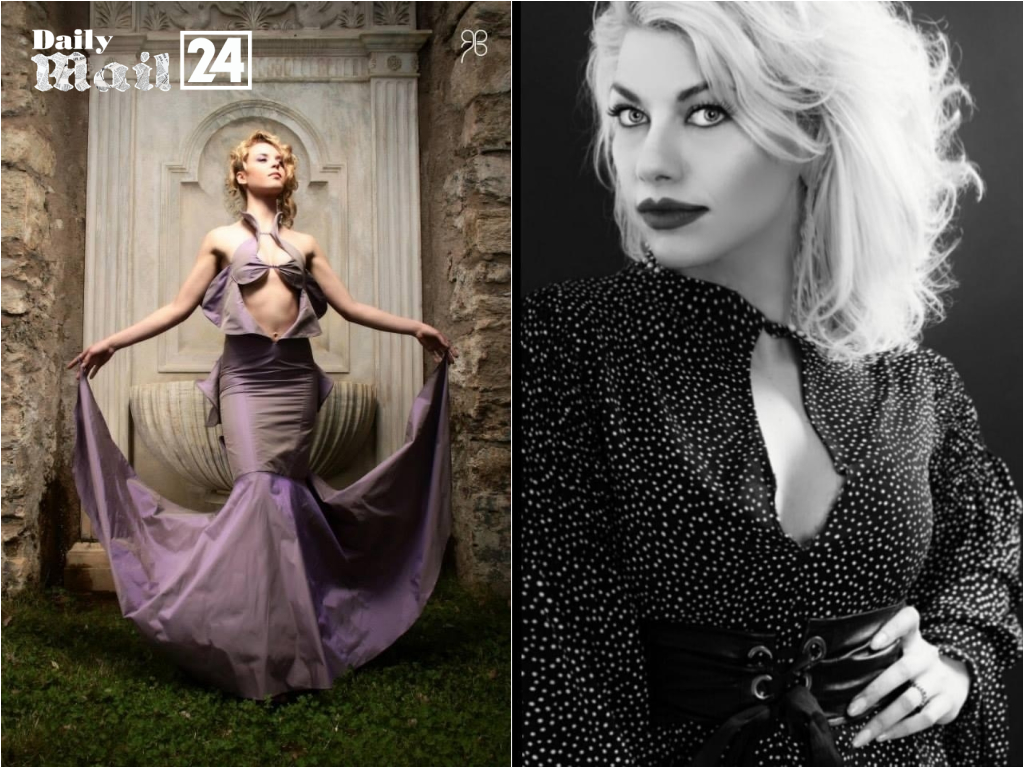 After university, where I received academic teaching, marked especially by the teaching of hand painting, I decided to attend a basic cutting and sewing course and a basic course of 3 Adobe programs: Indesign, Photoshop, and Illustrator, to expand my knowledge and enrich my professional background.

From 2009 to 2014 Ducotex S.r.l. published my designs to show their corporate fabrics in seasonal catalogs and in 2010 the magazine “Elegance” interviewed me and published seven pages about me, in the December issue, including the cover dedicated to one of my creations. 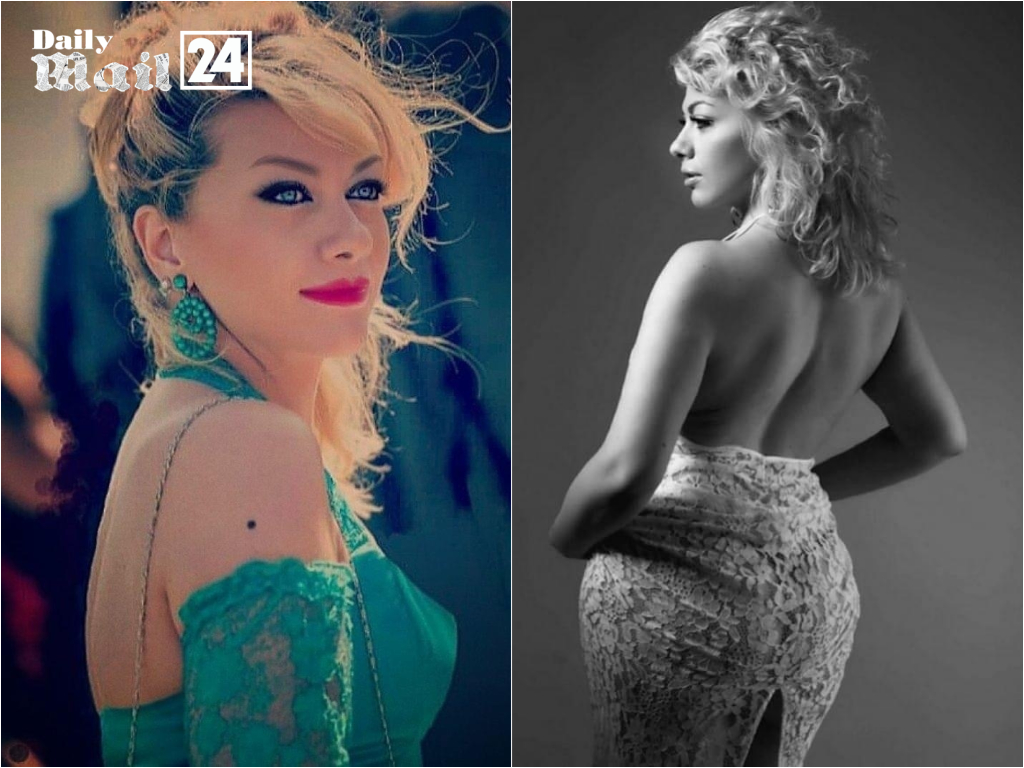 Last year, in May, I participated in a project called “Diritto all’eleganza” in collaboration with UILDM, for which I designed a garment worn by a woman in a wheelchair, during a fashion show in Lignano Sabbiadoro.

In October 2019 I did a fashion show on a yacht in Dubai Marina during Dubai Fashion Week and during “Barolo Fashion Show 2019” (a competition for young designers) I won a special price from Angi, an Italian-Chinese delegation, so, in November 2019 I went to Wenzhou. 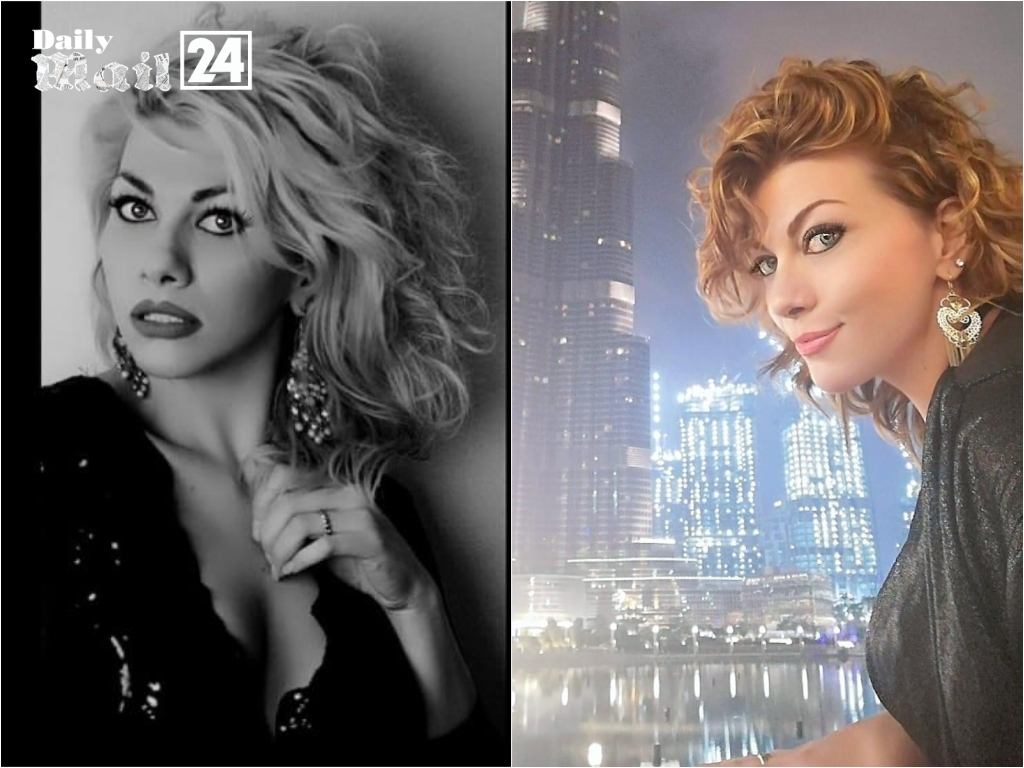 There, during Wenzhou private enterprise talents week, I had the opportunity to showcase my creations during a fashion show and to have B2B meetings with companies. In China, I presented a collection called: “Liberturyn”: La Fleur, Villa Scott, Palazzo Bellia, Villino Raby, the door of the Pomegranate, and Casa Medana – Perino.

These architectural jewels are the protagonists of the Italian-Chinese cultural contamination, which gives life to the LiberTuryn capsule collection.

Turin, my city, the Italian capital of the Liberty style that spread between the 19th and 20th centuries, holds these and many other architectural gems, which some details have been reproduced on fabric, painted by me.

Thus the quipao, the oldest dress of Chinese culture, is decontextualized and transformed into different shapes enriched by details extrapolated from the chosen buildings. 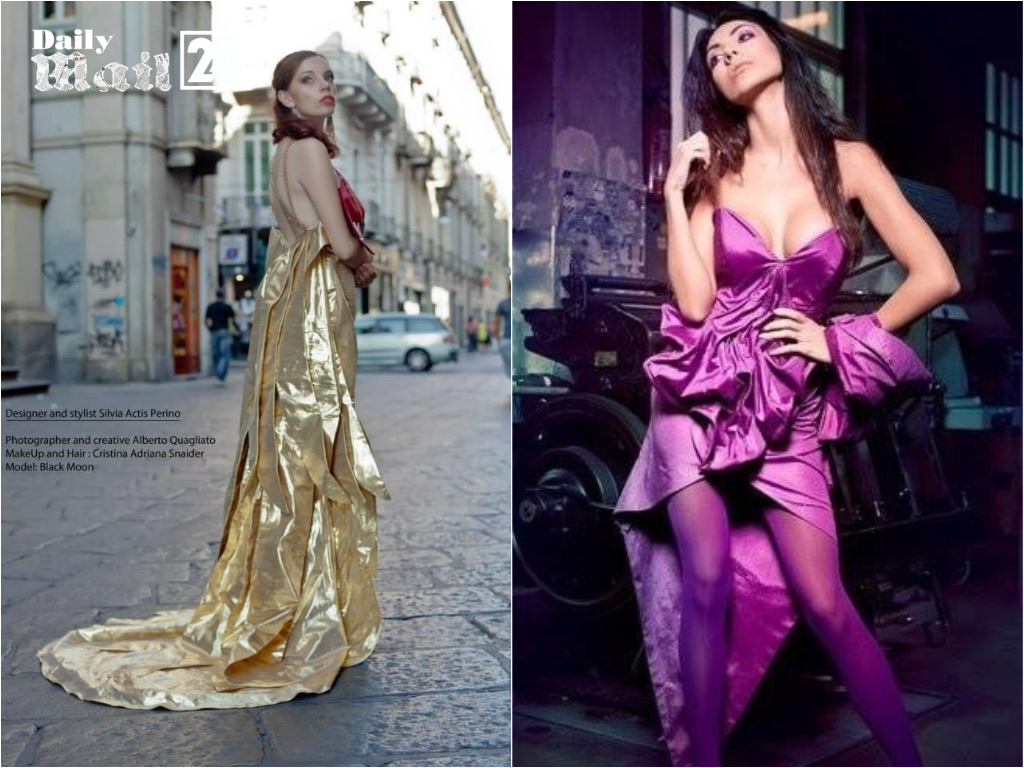 The detail of a window, therefore, becomes a cut on the décolleté of a quipao in a mini version, or is painted directly on a midi version of the same, with a Korean collar and side slits; or again, a long dress in floral lace above, and pleated below, recalls the lines drawn on a door and its wooden contours.

A ceiling, a facade, a window, or more, have been extrapolated and recreated on various variations of this ancient oriental dress, to pay homage to the bond between two cultures that are so different but at the same time both so rich in a historical/cultural heritage, worth of being emphasized through the creative language of fashion.

Everything is a source of inspiration for me: from nature to art, through architecture, math, geometry, and more else.

I like reading, and I am interested in everything that could be profitable for my labor and could enrich myself.

Each of my creations has its own name and tells a different story from all the others. Everyone who wears my clothes must feel the only specimen.

My brand is aimed at those who want to feel like a shell, perfect and unique in its golden section, but different from all the others. 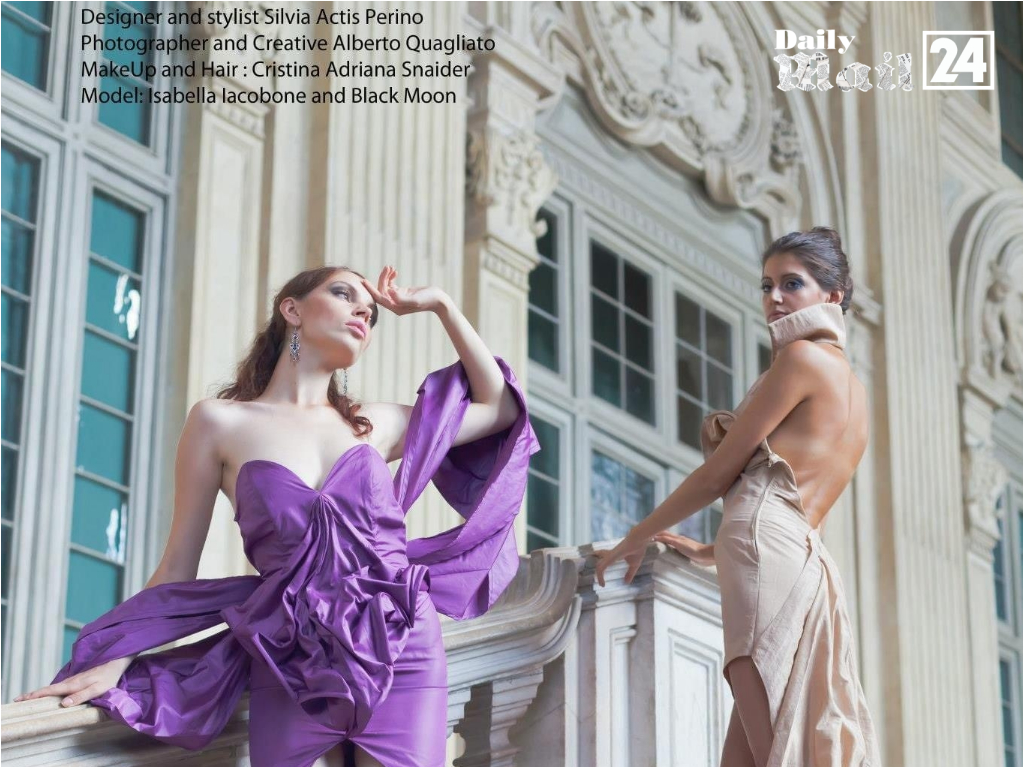 So, my brand was born with the idea of representing the harmony that comes from a detail which born between the balance and the diversity at the same time. Details are my jewelry on the crown: they come from something inspired by architecture, from the particular shape of an object, or a concept that is a source of inspiration to be inserted into a cut, in a particular shape, or reinterpreted and painted by me directly on the fabric.

Exactly like in nature, where there are perfect balances and geometries that lead us to think that every petal that makes up a flower is the same as another, and instead of looking closely, there’s always some subtle difference.

Environmental care is another topic that is very close to my heart. In 2018 I created a capsule called “Made with care” consisting of 5 dresses, each of which represented a specific problem linked to the protection of flora and fauna, a concept focused on the importance of creating a fashion system clean, ecological, organic, cruelty- free fashion system. It is also from this concept that my choice to create unique, tailored and not mass-produced clothes derives.

The historical period we are experiencing has led us to review everything from another point of view. And fashion cannot be considered outside this new perspective. But change does not necessarily have to be experienced in a negative sense. The nautilus shell teaches us this, which changes in size as it grows, but does not change in shape.

Thus was born EADEM MUTATA RESURGO, my last capsule collection that considers change as a new opportunity. I presented it last August during a Fashion Festival in Barolo (Italy).

“Although different, I am still reborn”, this Latin phrase was coined in the 17th century by the Swiss mathematician Bernoulli, to emphasize the importance of this creature of nature, a symbol of strength and constancy in adversity, which refers to the continuous cycle of life, of creation, without end.

Garments that had been forgotten in the closet for thirty years have been “revived” under a new guise, to give them a second chance, and thus symbolizing the hope of starting over, in line with today’s world scenario.

And this essential is completed by the use of fabric leftover or unused accessories. Thus, grandfather’s shirt collars are transformed into two straps of that skirt which is turned over to become a mini dress. Two tiffany-colored lace sleeves become a halter top, combined with a skirt that was previously a pleated dress. A cropped top with a lace window on the back, combined with a pencil skirt, was a dress not worn for forty years due to a stain that has been eliminated in the cut.

A small “spira mirabilis” in metallic gold, decorates the lapels of the new garments, reminding us that there is always a new beginning.

For everyone, for everything.

The importance I attribute to this symbol is also given by the fact that I have chosen the spira mirabilis to represent my logo, drawing my initials, whose central P refers to the Phi of Fidia, the symbol of the golden section and therefore of the so-called “divine proportion”.

The latest project I worked on, at the same time with Al-Wasl, is one of the projects that is closest to my heart since I started my career as a stylist because I believe that fashion must convey a message that goes beyond the mere aesthetic concept.

Next year, I will be part of an innovative start-up called Lilith, a monitoring and intervention system for violence against women, made up of a clothing line, which, thanks to the use of smart fabrics, is able to communicate with an App and a web platform. I am proud of this project thanks to which I will be able to show that fashion can be a vehicle to convey important messages and to create something concrete for society.

Inspired by the EXPO2020 Logo, which was constructed through the stylization of a series of concentric rings and a central ring which was recreated thanks to the reinterpretation of the stylistic characteristics of an ancient ring dating back 6000 years ago, found in the desert between Dubai and Abu Dhabi, the LOGO is a ring that means, in fact, the connection and the union between people.

We couldn’t let it pass that easy, when in fact in this delicate historical moment, the union between people is the most important symbol of strength and hope.

Who better than spouses can embody this concept of the solid union?

Thus was born this capsule collection of ten outfits, five married couples, each of which was created inspired by one of the architectures of the Expo pavilions.

The jewelry dress, the face-of WFFA 2021 Season is the flagship wedding dress that is made using the architectural design of the dome of the central reception pavilion as a reference.

The shape of the dome was recreated by inserting a white crinoline base, to give support to the fabric. It is in ivory lurex viscose, the fabric on which it is hand-painted in gold, the texture that is found throughout the skirt, the ornamental motif of the windows of the pavilion. This detail is designed to highlight the importance of Italian craftsmanship, the importance of the unique piece. Below, the fabric is cut and shaped in ogival arches, typical of Arab culture such as the entrances to the pavilion, echoed with layers of white and gold lurex tulle.

The upper encloses a long-sleeved bodice in nude tulle and white mesh, with lurex reflections, which draws the decollete in a boat neckline outlined by arches, like the openings of the skirt.

This bodice is closed by a choker ring, the ring that gives the collection its name, and is also shown on the head to become a fascinator that will support the long veil in pearly white and gold lurex.

The choice of the mesh fabric was made to emphasize the concept of “connection”, the fulcrum of this capsule that wants to create a bond of values underlining the importance of cooperation between nations, which draw strength and inspiration from mutual differences to create a network of connections between body and spirit, as the Expo slogan suggests “Connecting minds, creating the future”.