As you know, the 74th Cannes film festival was very different this year, with very few American actors, actresses and directors and few Indians (The Indian Pavilion was closed).

Here is a new answer for my interview about the 74th Cannes Festival and all the details with the names of the artists who came to the Garden Party on July 14th for the 15th OFF de Cannes anniversary. 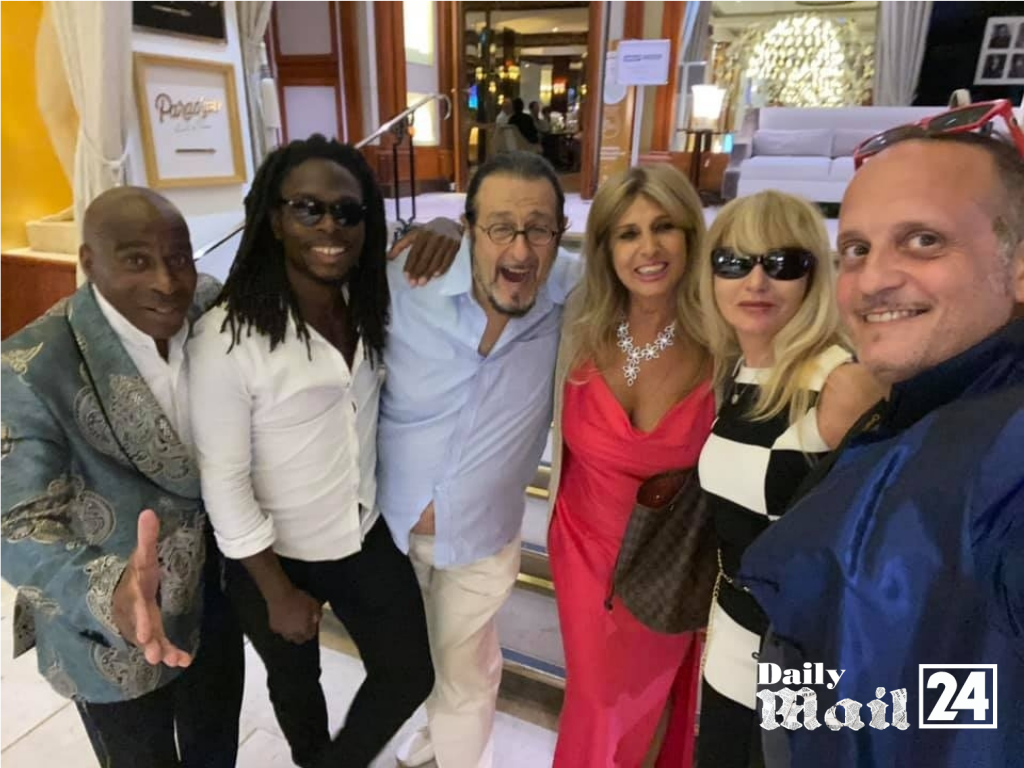 Saif Rahman Sozib: For the first time in 74 years the Cannes film festival has taken place in the heat of July, from 6th to 17th. Alain Zirah & Anne Gomis, you were the main actors during this 74th Cannes Film Festival. We heard that this year’s Cannes festival was very different, with few foreign people due to covid. But what happens to the Cannes festival who don’t like to honor the women.

Alain Zirah: Women were honored this year during the Cannes Film Festival. First, Jodi Foster expressed herself in perfect French during the opening ceremony of the festival. We will also remember the French actress Dora Tillier as mistress of the ceremony speaking in English before returning to French because of the ratings. Marion Cotillard was shown as a star, more than Adam Driver and the Sparks who came to make the opening with the film Annette by Leos Carax. Then Virginie Efira whose brightness of her dress in lame Dior and jewelry Cartier will overshadow the political message of its director Paul Verhoeven for the film Benedetta. In fact, as your reader could see in the last issue of your magazine, the red carpet has become a space dedicated to product placement and selfies forbidden to mere mortals.

Saif Rahman Sozib: It was the first time a black man was chosen to be the president of the jury.

Anne Gomis: Last year, the announcement of the first black president of the jury had caused as much discussion as the cancellation of the festival due to pandemics. This year, he is unveiled on the façade of the palace. Or at least, his glasses and his cap. Photoshop replaced Brooklyn with the symbolic golden palm. For once a president is black, but the festival leaders avoid showing his nose. Like for the Egyptian statues. Something to make a buzz. So, Spike Lee overexposed himself in a pink fuchsia Louis Vuitton outfit with sneakers. And the people asked: Where did Spike Lee go? He was very active for the black people and for the women.

Alain Zirah: The rise of the steps on the red carpet looks like a night of the Caesars French ceremony. There were almost only French people. The only American star who caused a crowd movement was Matt Damon. He came for the film Stillwater, shot in France with Moussa Maaskri, a French actor from Marseilles. Where are the stars? What happened to the successors of Marlon Brando, Greta Garbo and Anthony Quinn? Where are the new Alain Delon, Jean Paul Belmondo, Brigitte Bardot, David Bowie? If they came to Cannes, it was not to show themselves to the public.

Anne Gomis: The new actors of 2021 are young people from reality TV, showing their surgery on social networks and reality shows. TV influencers attract the entire media, counting their talent to their number of followers. Everybody is a star.

Saif Rahman Sozib: So, you mean the film festival was mostly a red carpet attraction with French people. Do you think it was a good idea to choose July for

Alain Zirah: The 74th festival is an event that has run out of steam. All the events were in July. On Sunday evening, rental tuxedos offer their seats to rise the steps on the red carpet. But nobody wanted them. The only thing that matters was the Euro 2020 final. England-Italy. Everyone was wedged in front of the screens in the restaurants. Italy was in trouble in the penalty shootout. No one cares about Iranian or Swedish cinema and movies. Everyone has their eyes riveted on the ball frozen on the penalty spot. Goooaaal! The Italian flags appeared from the cars in concerts of horns. Cannes was only celebrating Italian victory at soccer.

Saif Rahman Sozib: Fortunately, the Garden Party of July 14th, organized for the 15th anniversary of the OFF de Cannes, highlights the exemplary work of you, Anne Gomis, founder of the Great International Web Contest, and you, Alain Zirah, who bring international visibility to talents from cinema, writing, visual arts, music and fashion.

Anne Gomis: With the contest, we brought international visibility to the winners of the competition. There were more than 9,000 artists who participated. With our OFF de Cannes organization, we bring them from the local to the international level. By the way, the OFF de Cannes is finally on Wikipedia. A guarantee of seriousness and respectability.

Saif Rahman Sozib: The 14th of July is a historic date for France. The last presidents of the French republic invited the main personalities to the Presidential Palace of the Elysee for a mythic Garden Party. So, could you tell us more about the OFF de Cannes’ Garden Party of July 14th?

Alain Zirah: This year, President Emmanuel Macron was not allowed to organize its event, due to the pandemic. So, it was funny to organize the OFF de Cannes’ Garden Party on July 14th in a luxurious place during the Cannes festival. Our team presented a fashion show composed of a dozen of talented designers and beautiful models in the palace while, on la Croisette, tuxedos and long dresses rub shoulders with vacationers in shorts and flip-flops. From noon, this music festival brings a bubble of authenticity with the explosion of colors of Brazilian dancers setting fire to the Palais Clement Massier (Ladies Glam United then Lame d’Orient), the presence on the stage of female artists evoking Saint Germain des Près (Adelia Martins, then Francine Cazanobe), the flights of the keyboard of Saori-Jo then Julianne (InFuzzion) are invaded by a demonstration of tap dance of the Swiss champion Angelo Borer (Crazy Feet) before the electro breakthrough (Galaxy Cat).

Anne Gomis: Women are still in the spotlight with a fashion show composed of fashion shows of a dozen designers supervised by Paulette Mouquet succeeding creations from Abidjan (Emeline K) or Togo (Kombate Sylvanak), swimwear Amira for Pretty Creation and Ready Lady bridal lingerie. The Irish designer Asta Jakubson presented in exclusivity her dresses inspired by Joan of Arc, made of silver wire, and the Sri Lankan designer Enoka Fonseca received the Prix Coup de Coeur des OFF de Cannes for her red dresses topped with flower crowns, also red. Women also invaded the stage around the singer and guitarist Jean Marie Monteiro (Guinea-Bissau) then Bébert le Frelon, the darling lent by Cyril Hanouna who sang, dressed as a bee.

Saif Rahman Sozib: I’m sure the international show was also made with men coming from the different countries of the planet.

Alain Zirah: Of course, Saif. The male artists were not left out with the lyrical flights of the baritone Richard Rittermann in excerpts from operas including Carmen and Turandot by Puccini. A wonderful voice! Richard, we have adopted him. He was joined by Indian artist Raghunath Manet, one of the masters of the vina, who also offers us a sacred dance from Pondicherry, where The Bayaderes came from. The visual and sound designer Devy Man, OFF de Cannes winner in 2009, presented new compositions accompanied by the dances of Shigemi Sawa, coming directly from Japan, in traditional dress. We joined Bruno Chatelin, president of our international jury and founder of the Filmfestivals.com platform, to present the singer River Link. The writer Lionel Gnali received the PACA Films Prize from the OFF de Cannes for the book who could become a movie, by the former minister Roland Dumas representative for his book A broken destiny. The duet Indylov did bring love to the public before giving way to Will Barber, and his Old School guitar. The musician had been selected in the French 6th TV show The Voice. And the party did continue with the presence of Miss Brazil, Barbara Vittorelli, the singers Malekoumsa and Saty Djellas…

Saif Rahman Sozib: So it was a very good way to celebrate the 15th OFF de Cannes birthday. With some of the best artists, you chose for the happy few. You had several media with you

Anne Gomis: There were more than 600 happy few who applauded our artists. And it was with a cake from the pastry shop Sana Herbert that we celebrated the 15th OFF de Cannes anniversary. And we had a fantastic hypnotist showman, Magnetique, who left the audience without any voice, putting to sleep one of the volunteers to do crazy things. During the After-Party Color Dancing, there was a succession of DJs for nightclubbing. The event was followed live by four radio stations for Cannes, Marseille, Paris and Belgium. And shot by media from England, UK, Netherland, India, Philippines, USA Caribbean and Africa.

Alain Zirah: The day after, a meeting was organized with the main Congolese television channel for a long television interview of the team. Half a dozen members of the jury could not come to France because of the pandemic. No matter. The ceremony is postponed to a later date. Never mind the hearsay about the vaccines and the health pass. It was time to celebrate the past 15 years with artists from all over the world.

Anne Gomis: Three days later, it was the celebration of Julia Ducourneau, winner of the Cannes Film Festival’s Golden Palm for her second film Titanium.  The president of the jury, Spike Lee, is certainly at the origin of this supreme prize that rewards the young director. The second victory was offered to a woman director, in 74 years. Next year will be the 75th Cannes Film Festival. But many will be waiting for the announcement of the events planned for the OFF de Cannes with several women. Women will take the power. For the pleasure of men.